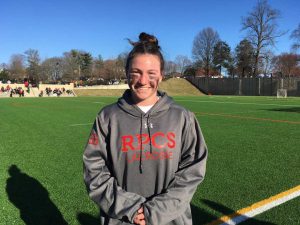 Meg Miller’s first year at the helm of Roland Park Country School’s fourth-ranked lacrosse team is everything she thought it would be — and more.

The Reds are off and winging under Miller in the IAAM, running their A Conference record to 4-0 this spring after topping No. 10 Archbishop Spalding, 13-11, on Tuesday afternoon.

Considering that the Cavaliers had not given up more than eight goals in any of their first five games, Roland Park’s offense proved that it could be both explosive and efficient in the wire-to-wire win.

The Reds (4-1 overall) jumped out to a 3-0 advantage on goals by junior attacker Katie Novotny, junior midfielder Peyton Woodward and senior midfielder Kiki Shaw and maintained at least a two-goal bulge throughout the contest.

It could have been a different story if Roland Park senior goalie Amber Bustard had not done her best work of the game in the first half when she contributed seven saves, three of which were from from very close range.

While Bustard was frustrating the Cavs’ shooters, her teammates were building as much as a five-goal lead in the second half against Spalding senior goalie Paige Gunning.

That outburst came after the Cavs (4-2, 1-2 IAAM A) cut the deficit to 8-6 early in the final period on goals by sophomore Abby Scully and junior Kristin O’Neill.

Roland Park’s decisive 4-1 mid-period run was fueled on goals by Shaw and Woodward before Scully countered for Spalding, followed by back-to-back tallies by senior Adele Spencer and Smith.

Trailing, 12-7, the Cavs responded with a 4-1 run of their own that featured three goals by senior midfielder Tori Bates and one with just under a minute remaining in regulation by senior attacker Maria Comella to make it close.

The Reds’ scoring concluded when Shaw finished a fast break for her game-high fifth goal of the game on a nice feed from Becca Sturtz.

When Smith grabbed the crucial draw after Comella’s goal, the Reds were able to play keep-away to secure the victory.

In what was a frustrating setback for the Cavs, they produced enough shots to stay in — or possibly win — the game, but couldn’t quite get enough of them past Bustard.

“A lot of times it comes down to shot selection,” Shea said. “And we didn’t always take the best ones.”

Smith, who finished with two goals and three assists, said that “team unity and supporting one another on and off the field” is helping the Reds compete at such a high level.

Miller said that she is carrying on some of the things that were already in place under her predecessor, Kim McNemar.

“I’m just brining in some of those things more to the forefront,” she said. “We’re taking it game by game and just trying to improve every day.”