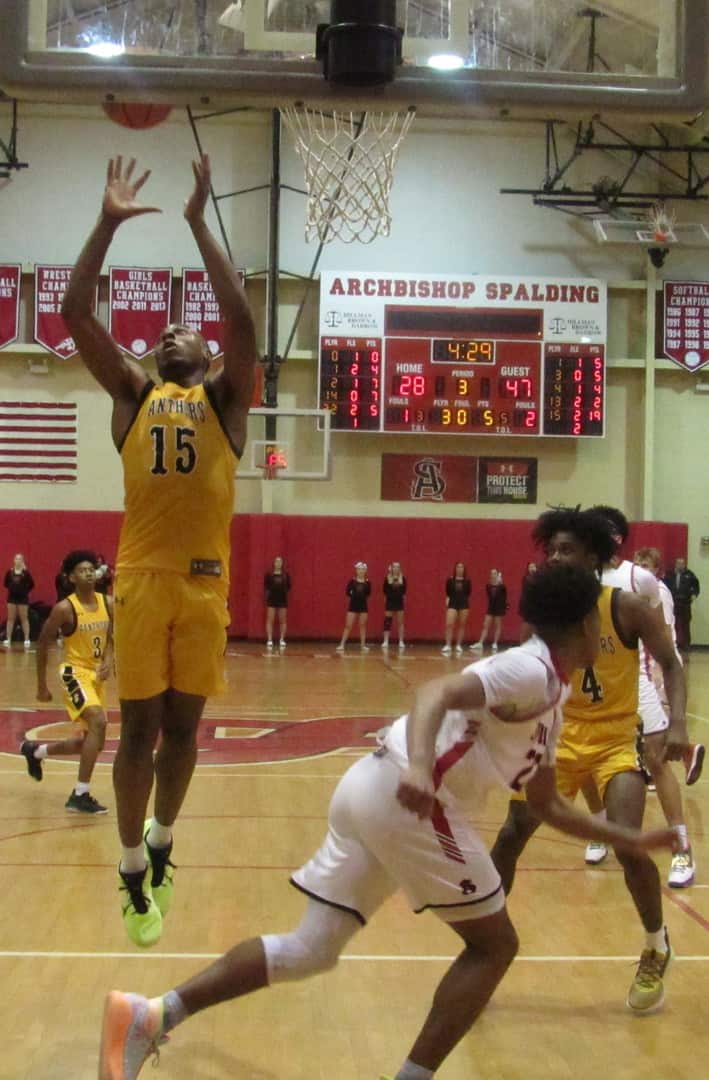 St. Frances’ Jamal West (15) closes in on one of his 13 rebounds Friday. The senior forward finished with a game-high 23 points and 13 rebounds as the third-ranked Panthers defeated No. 11 Archbishop Spalding in a MIAA A Conference/Baltimore Catholic League match in Anne Arundel County.

St. Frances Academy boys basketball coach Nick Myles had a dilemma Friday evening. With another key contest hours away, Myles and the Panthers had to deal with an up-and-coming Archbishop Spalding crew on the road while making sure his starting core did not get overworked.

No. 3 St. Frances managed the balancing act, claiming a 64-53 victory over the 11th-ranked Cavaliers in a MIAA A Conference/Baltimore Catholic League tilt in Severn. South Alabama-bound forward Jamal West had 23 points and 13 rebounds for the Panthers (24-3) while Julian Reese also provided a double-double.

The defending MIAA A and BCL champs from Baltimore City led by as many as 23 points, winning its third straight after dropping its first match in both leagues a week ago at Mount St. Joseph. The Panthers (11-1) are in a virtual tie for first with the Gaels (12-2) in the MIAA A Red Division, and sit a game (8-1) behind St. Joe (9-0) in the BCL standings.

Myles got what he wanted Friday with top-ranked Poly Saturday afternoon.

“I think the kids were locked in and focused. Every knows it’s a huge game tomorrow,” said Myles. “We played well early and was able to get some guys some rest which is important with another game less than 24 hours.”

“When we get off to a fast start, we don’t have to about the crowd or the refs,” said Panthers senior point guard Adrian Baldwin.

Baldwin, the reigning VSN Player of the Year and Virginia Commonwealth University recruit, sat the entire fourth quarter after St. Frances constructed a 53-32 lead after three. The Cavaliers (12-8, 8-6 MIAA A, 5-4 BCL) got the lead down to 13 midway in the fourth before spreading the floor and getting the ball inside to Reese.

Reese, a 6-foot-8 junior, finished with 18 points and 12 rebounds as he and West dictated the paint Friday.

“More than any other guy this was important because he’s getting back into a rhythm,” said Myles. “He was a sick against St. Joe and probably shouldn’t had played and that’s my fault.”

Reese, who’s attracted early scholarship offers from Maryland and Syracuse, was more critical of his performance.

“I feel like I could have played better defensively, guarding the ball instead of trying to get blocks,” Reese said. “I could’ve attack more on the offensive end and shot the ball better.”

West, 6-5, established his presence early, using his athleticism and sheer relentlessness, scoring 11 points as St. Frances led 23-11 after one. The Cavaliers cut the lead to 32-23 late in the second, but a 7-0 run, capped with a West extra effort basket and a Baldwin three-point dagger with a second left, extended the Panthers’ lead to 39-23 at halftime.

West got a pass from Baldwin and hit a tough shot over Spalding defender, giving St. Frances a 51-28 advantage late in the third. He scored his 23 points in three quarters of work.

“We’re playing together, not going for ourselves, we’re playing for everybody,” said West. “When we play like that, we can’t be stopped.”

Sophomore guard Ty Peterson led Spalding with 18 points and Jordan Pennick added 13. The Cavaliers tried to comeback in the second half, cutting a 23-point deficit to 11 in the fourth.

Spalding first-year coach Josh Pratt said it was another learning session for his young and improving team.

“You can’t give a good team second and third opportunities on the offensive end,” said Pratt, who has four starting sophomores (Peterson, Pennick, CJ Scott and Cameron Whitmore). “My sophomores are learning and no matter how much I tell them, sometimes what you have to do is got through the experience as a player. I’m proud of my upperclassmen, we’re trying to mold something.”

The Panthers have a highly anticipated rematch with Poly, ranked 19th nationally by ESPN and 24th by MaxPreps, Saturday at 4 p.m. at Morgan State University’s Hill Field House. The Engineers rallied from a nine-point fourth quarter deficit to beat St. Frances, 59-58, in front of nearly 3,000 at Towson University’s SECU Arena.

Two years ago, the Panthers defeated Poly, 65-57, in front of a standing-room only audience at Goucher College. Hundreds of spectators, including Villanova coach Jay Wright, weren’t able to get in.

“We’ll be there,” said Myles. “Big-time players show up for big-time games so at 4 o’clock tomorrow, we’ll have our guys prepared and ready to win a basketball game.”