After 12 seasons, Jones steps down as Dunbar boys hoops coach 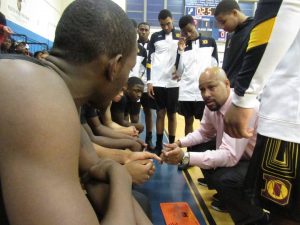 Diego Jones talks to Dunbar’s boys basketball team during a timeout during a Baltimore City league in Februrary 2018. Jones recently stepped as Poets coach after 12 seasons and five state championships.

For more than a decade, Cyrus “Diego” Jones knew it was a “blessing,” when he walked into Dunbar High’s gymnasium.

“It was a honor because knowing the history of the school and being a former player,” said Jones. “That’s what made it a blessing.”

And no one understood the meaning of “Poet Pride” more than Jones, who spent parts of four decades as a player and coach at the east Baltimore school. After 12 seasons as varsity coach, Jones has stepped down.

“I have a lot of memories and I’m thankful for the opportunity,” said Jones. “I think I made an impact with the young people which was always my goal.”

Friday evening, Jones sat in Poly’s gym watching his senior Malik McCormick play in the Baltimore City/Baltimore County All-Star game. He said he’s been considering stepping away the past couple of seasons.

“Midway through the season, I had a talk with my family and came to the conclusion this was going to be it,” Jones said. “It was a number of things that contributed to the decision, but I thought it was the right time.”

Jones, who was a starter on the Poets’ 1991-92 national title squad, said it wasn’t pressure being coach.

“There’s expectations of course, but no pressure,” said Jones. “With the history of the school, everybody is used to seeing Dunbar win. You just try to carry out those expectations, but you can’t necessarily put that first because you have to look at what’s in the best interest of the kids.”

Among Jones’ best memories is winning the 2013 city Division I title with Daxter Miles, who would went on to play for West Virginia and Kamau Stokes (Kansas State). The Poets’ 2012 state 1A title with Donte Pretlow (Morgan State), Evan Singletary and Roderick Hairston stood out for Jones as well.

“They did it the right way, earning their way through, being freshman on JV, and working their way to varsity,” said Jones. “Trusting the process.”

Keith Booth and Donta’ Bright, who starred with Jones on the Poets’ 1991-92 national title squad, are rumored to be among the candidates for the Dunbar coaching position along with former Mount Carmel coach Hakim Hibbert.

Jones said “the door is open for anything,” as far his next opportunity.

“I feel I still have a lot more to give to the game,” said Jones. “It was time to step away and do something different.”