Read all about it: Calvert Hall drops Loyola in Turkey Bowl 100 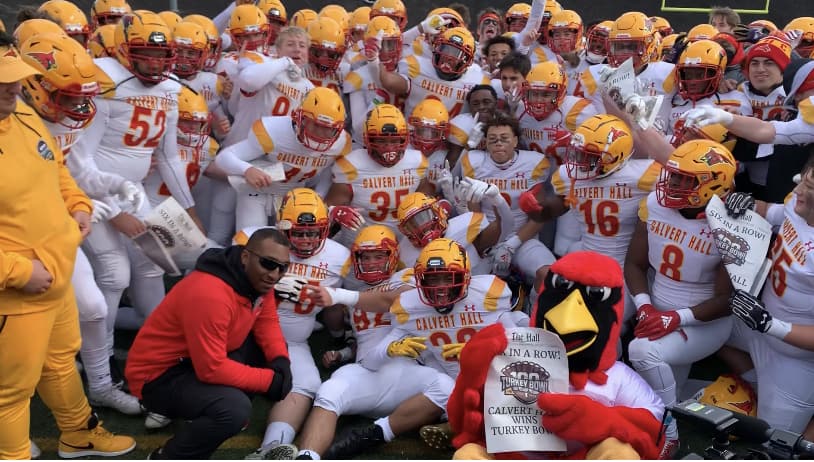 For the second year in a row, Cole Herbert and Sean Tucker provided a one-two punch for Calvert Hall (9-3) against Loyola Blakefield to send the Dons (8-2) reeling to their 10th loss in the last 11 Turkey Bowl encounters against the their cross-Towson archrivals.

After last Thanksgiving’s showcase when the duo accounted for three TD receptions (Herbert) and 177 rushing yards (Tucker) at Johnny Unitas Stadium in a 40-7 triumph, the Cardinal stars were just as lethal on Thursday morning when Herbert scored three more times and Tucker bludgeoned Loyola on 24 carries for 184 yards and a touchdown in a 33-10 victory at the same site.

With a sold-out crowd of 11,200 wind-whipped fans on hand for the 100th edition of the longest continuous annual football game between Catholic Schools in the U.S., Herbert and Tucker were at their best leading an unrelenting rushing attack that totaled 336 yards.

With Tucker doing the heavy lifting by gouging Loyola’s defense on the ground, Herbert provided the finishing touch on a pair of scoring drives to open the contest. 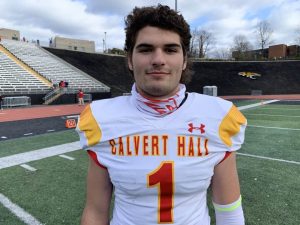 Seniors Cobie Floyd and Ray Glass were the other Cardinal backs who made life miserable for the Dons, who amassed just as many first downs as Calvert Hall (12) but were out-gained 463-279.

Herbert made the first major dent in the Dons’ defense when he scored first on a 32-yard rainbow from senior quarterback Amir Jenkins, going over two Loyola defenders to snare the ball deep in the end zone to give the Cardinals a 7-0 advantage with just over four minutes remaining in the first quarter after Peter Moore’s conversion kick.

Herbert inflicted even more damage on a 4th-and-2 from the Loyola 39-yard line a couple of minutes later when he took a direct snap from center, broke through a group of would-be tacklers at the 30 and then streaked his way past another another defender at the 5 to double the lead with 53 second left in the period.

Herbert said it was his first carry of the season, although by the way the play unfolded it looked like the Cardinals had been implementing the Wildcat routinely.

“We’ve been needing to do more (on offense),” the 6-foot-3, 205 pound wideout headed to North Carolina to play lacrosse said. “We decided to break it out today.”

Loyola (8-2) crept to within 14-3 early in the third quarter on a 29-yard field goal by senior kicker Connor Gill after an 11-play drive fueled by an 18-yard pass from junior quarterback Jordan Moore to Peter Lukish and a Moore 10-yard scramble.

After Tucker ripped off runs of 37 and 21 yards on the ensuing drive, Herbert scored on a 3-yard burst from the Wildcat in in the third to up the margin to 20-3

The lead ballooned to 27-3 after Herbert, who also played some safety, pounced on a fumble at the Loyola 34, giving Calvert Hall a turnover that they capitalized on just four plays later when Tucker bullied 3 yards into the zone with just over three minutes remaining in the third quarter.

A 46-yard pass from Jenkins to senior tight end Kaelin Wade was the linchpin of that drive.

Loyola retaliated shortly thereafter when Jordan Moore used his elusiveness to scramble out of the pocket and buy enough time to find sophomore wideout Ben Scheiff on a 35-yard pass for Loyola’s lone TD with just over a minute left in the period.

However, Calvert Hall put the game out of reach in the fourth quarter on Floyd’s 10-yard off-tackle rumble midway through the period.

Calvert Hall coach Donald Davis, who now has guided the Cardinals to their best 11-year stretch in the century-old series, said that employing Herbert in the Wildcat would give his offense a new look.

“It was something we knew that they wouldn’t be prepared for because they hadn’t seen it,” he said. “Cole is just such a great leader and an unselfish a player who plays for his teammates. It’s great to have a kid on the team who doesn’t care what he does — he cares more about what his teammates do.”

Keeping Jordan Moore from running wild was Calvert Hall’s predicament before the game was its major issue — and one that was addressed fairly well by defense.

“He gave us a little trouble,” Herbert said. “But we figured it out.”

Keeping the integrity of the rushing lanes was a key to containing Moore, Davis said.

Disappointed Loyola coach Anthony Zehyoue said that Herbert’s first TD grab hurt the Dons from getting a big stop early in the game.

“We had a couple of guys back there, but he made a nice play,” he said. “At the end of the day, they just made more plays than we did. (Herbert) made a great cutback on that run, too. We just need to get better.”

Loyola, which dropped it sixth straight game to the Cardinals, still leads the all-time series, 49-43-8. But Calvert Hall has now prevailed in the first, 50th and 100th games since the series began in November of 1920.