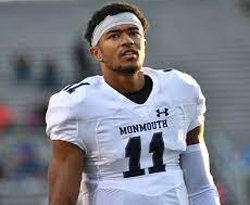 Former Calvert Hall quarterback Kenji Bahar, who initially signed with the Baltimore Ravens as an undrafted rookie free agent in the spring, before being waived by the team in June, is back in camp his NFL hometown team for the third time this off-season.

Bahar, who played his college football at Monmouth University, was resigned by the Ravens at the start of training camp when starter LaMar Jackson was unable to practice after contracting COVID-19. When Jackson returned to practice, Bahar was released for a second time on Aug. 8th.

Bahar was welcomed back to the Ravens’ Owings Mills’ training facility on Tuesday following a back injury to Trace McSorley in Saturday’s exhibition game against the New Orleans Saints. McSorley, a third-year veteran, has been competing with Tyler Huntley, a second-year player, for the Ravens’ back-up quarterback role.

At Monmouth, Bahar was named the Big South Conference Offensive Player of the Year in 2019 and went 28-12 as the Hawks’ starting quarterback between 2016-19, as he passed for 9,642 yards and 70 touchdowns, while rushing for 333 yards and 11 TDs. Bahar graduated from Calvert Hall in 2015 where he was a two-year starter, throwing for 1,900 yards and 18 touchdowns as a senior.