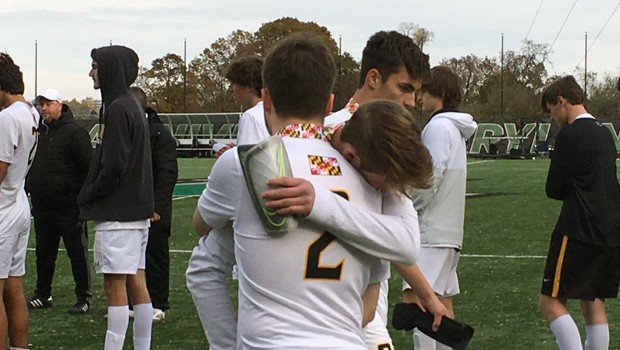 There’s no way to sugar-coat what happened to Harford Tech’s boys soccer team about midway through the regular season.

For about two weeks the Cobras hit the skids.

They lost four straight games, yielding a dozen goals in the process.

It took a slump-busting 5-0 triumph over Elkton in the final game of the regular season to right the ship and ignite a five-game winning streak that included consecutive decisions over Rising Sun, North Harford, La Plata and, most notably, reigning state champion Century.

The rag-to-riches narrative continued in the state final on Saturday afternoon against unbeaten Parkside (15-0-2) in the Class 2A state final at Loyola University’s Ridley Athletic Complex until the Rams from Salisbury snapped a scoreless tie in the 59th minute on a swift counter attack that resulted in a goal by senior forward Brady Mancha on a perfect assist from junior forward Luke MacDonald.

Harford Tech goalie Andrew Wozar had no chance on the play that developed rapidly and was executed perfectly.

Even though the junior keeper came off his line to cut down on the Mancha’s angle, a deft touch on a slow-paced ball found the inside of the far post for the game’s lone goal.

The play was started by Parkside senior goalie David Filart, who collected a shot off a free kick and spotted Mancha breaking the other way.

The ensuing give-and-go from Macha to MacDonald and back earned the result the Rams needed to claim their first-ever state title. Their last championship game appearance was in 2004.

“I got the ball and passed it to the wing and hoped I’d get it back,” Mancha said. “I thought I hit it wide. I’m a senior, and to score the winning goal in a state championship game….I didn’t know what to do. I spent more energy celebrating than I did scoring.”

Wozar, who started the preseason as a striker and then volunteered to mind the net, had no illusions about the shot’s ultimate destination.

“Their keeper gave a great ball (to MacDonald),” he said. “And they were very good at connecting. All you can do on a play like that is to come out and hope for the best. I knew it was going in.”

Senior defender Thomas Geyer, seeking his ninth goal of the season, smoked a 40-yard free kick in order to draw the Cobras even, although the ball went directly into Filart’s breadbasket to thwart the threat.

In the first half, senior defender Seth Topfer’s sizzler that eluded starting goalie Tyler Janeski was alertly cleared by a Parkside defender to keep the game scoreless.

Wozar also helped in that regard when his leaping save at the upper right corner denied the Rams the lead.

That brilliant play complemented back-to-back stops he made when Parkside was in the precipice of doubling its advantage late in the final period.

“Drew kept us in the game with some great saves,” Harford Tech coach Mike Dempsey said.

He and the defense, anchored by senior midfielders Aydin Blevins and Geyer and freshman defender Brayden Christ, were a big part of the reason why the Cobras (11-6) allowed only four goals in the final six games.

“We had to make some tough decisions,” Dempsey said. “We moved some pieces around after some guys were missing (during the losing streak) and that sparked it.”

It worked well enough for a team with just seven seniors to reach the title game for the first time in school history.

And Parkside coach Blair Osborne was concerned enough about the Cobras to devise a game plan to stop the ‘A’ team — sophomore forward Aiden Hall and Ayden Blevins — from going off.

“We knew that they were their most dangerous players,” he said. “We never wanted to go 1-on-1 with either of those guys.”