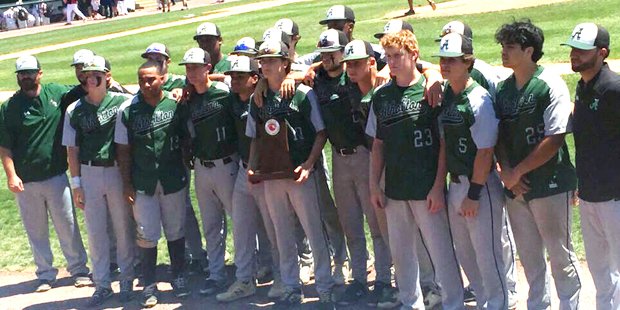 Atholton poses with the Class 3A state baseball finalist trophy at Regency Furniture Stadium Friday. After a promising start, the Raiders’ bid for a first state championship since 2002 was spoiled by Southern Maryland’s Chopticon in a 4-2 loss.

With two runs already across, the bases full and no outs in the top of the first inning in Friday morning’s Class 3A state baseball championship game in Southern Maryland, it was not too difficult to imagine Atholton High making the 60-minute return trip from back to Howard County with the state championship.

Unfortunately for the Raiders, Shane Smith had other ideas.

The Chopticon senior entered in relief in the first and promptly struck out the side. Smith kept the Raiders off the board for the game’s duration and the St. Mary’s County school rallied for a 4-2 victory at Regency Furniture Stadium in Waldorf.

“It was a tough game. We came out and competed our hearts out,” Atholton coach Scott Peddicord said. “They’re a high-quality ball club and they deserved it. They played a better ball game today. That reliever did a hell of a job. Just wish we could have made a little more contact on him, but we never gave up.”

The Ellicott City school kept battling, but it wasn’t enough to capture its first state crown since 2002. Chopticon (13-1 overall) claimed its first title since 2015 when it outlasted Mount Hebron, 1-0, in a classic pitcher’s duel at Ripken Stadium.

While Ljay Newsome, who pitched in the majors for the Seattle Mariners last spring, was a thorn in Mount Hebron’s side (struck out 17 in  complete game one-hitter) in the 2015 3A state final, Atholton’s hopes for a storybook ending Friday were ruined by Smith.

Atholton (11-4) had its way with Chopticon starter Shawn Cameron immediately Friday with Diego Carrion and Liam Snow each working walks before Tony D’Angeli’s single to right loaded the bases. Jason Drucker and Devin Hollingsworth followed with walks to drive home what turned out to be the Raiders’ only runs of the game.

Following Hollingsworth’s free pass, Smith relieved Cameron and put out the fire. Chopticon answered in its first at-bat, as leadoff batter Phillip McCarthy singled off of Snow and eventually scored on a double play grounder. With two away, Jordan Faunce drew a walk and then came around with the tying run on Demetrius Jamison’s triple to right.

An inning later, Howard Miller led off with a single, moved to third on Blake Adkins’ double and scored the go-ahead run on a ground ball off the bat of Brandon Mills.

Chopticon added an insurance run in the fifth when Cameron scored after Aden Hill drew a walk with the bases loaded to increase the Braves’ lead to 4-2.

The Raiders attempted to mount a rally in the top of the seventh, with Dustin Eidson and Carrion opening the frame with back-to-back singles. With one out, Charlie DeCelles got aboard with an infield single to load the bases to put the Raiders within one base hit from potentially tying the game. But Smith was able to again escape unscathed with two fly balls to center to secure the championship for Chopticon.

Through six games in the unique 2021 season, Atholton was 3-3. The Raiders proceeded to reel off eight straight wins – including wins over Stephen Decatur and Linganore in the state quarters and semifinals – to earn themselves a chance to play for the state championship, an outcome that few might have expected entering the campaign.

“Pretty much the whole playoffs we weren’t expected to do this,” Peddicord said. “We came together as a team and really just kept on picking each other up. There was always somebody else that picked up that clutch hit. Today we were just one of those clutch hits short of making it a tie ball game again.”

“We had a great year,” added Atholton senior shortstop Nick Varda. “Nobody expected us to go this far. We weren’t even supposed to be top four in the county. I couldn’t ask for a better team senior year. It was a great year, honestly. I wish I could relive it.”