No. 1 Atholton volleyball stay perfect with another sweep (VIDEO HERE!) 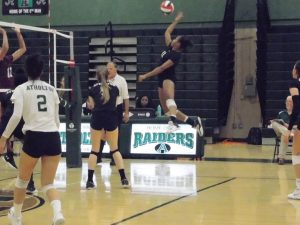 Atholton’s Jessica Humphries hits the ball during the second set of Monday’s volleyball game with Broadneck. The No. 1 Raiders remained undefeated with a straight set decision in Columbia.

It’s a given that top-ranked Atholton High has firepower on its volleyball team and is deep, but its defense is not to be overlooked as Broadneck found out Monday night in Howard County.

The No. 9 Bruins, regarded as one of Anne Arundel County’s top teams, were swept by the Raiders, 3-0, in one hour and 10 minutes as the home team impressively combined their point-power with their defensive skills and athleticism in a 25-13, 25-14, 25-22 decision to improve their record to 3-0.

Broadneck fell to 1-2, with losses to VSN’s top two teams in  Atholton and South River.

Admittedly, the Raiders were concerned about Broadneck, led by juniors Emma Quandt firing in 10 kills and Neely Winter chipping in four, coming into their gym for the non-conference game.

“We had no answer for them last Saturday at Westminster,’’ said  first-year coach Larry Schofield referring to his Raiders’ 2-0 loss (less than 3-wins or 3 losses do not count on a team’s overall record) to Broadneck in the Mason Dixon Tournament at the Carroll County school Sept. 8. Zoch did not play in the tournament.

“I think the girls wanted to make a statement tonight (Monday) and show them that we are better team than what they saw up in Westminster. We showed it.”

The Raiders started against the Bruins with an early 8-0 run and gradually built a commanding 16-3 lead before the visitors got within seven points at 19-12 on the feisty Winter’s second kill of the first game. Had it not been for the Raiders hustling defense led by their senior libero Elise Park, the Winter kill might have given the Bruins the lead.

Early on, Broadneck was unleashing good shots many of which appeared to be headed for the hardwood floor only to be snuffed or redirected by Atholton defenders. Park seemed to be all over the floor with her teammates.

“It’s all on our energy and we all push each other,’’ said the diminutive Park. “Evergy is a big part of our team and defense is a mind set.”

The 5-foot-9 Rorls along with the 6-1 Smith, Sogbesan and Humphries (five kills) hovering around the net and often going up for opposing shots kept the Bruins at bay. Someone would seem to track good shots in flight by going up, sideways or diving for them to prevent points by their foes and much of the success came from their superb passing to each other. They forced an abundance of errors by the Bruins who struggled at the service line while Atholton was 93-percent serving.

“Our main focus is passing,’’ said Rorls of one of the team’s main strengths.

When the first game got to 19-12, the Raiders started pulling away to finish with a 12-point win. The big lead and accompanying defense proved to be too much for Broadneck.

Smith, whose dad, 6-foot-8 Matt Smith, played basketball at the University of New Orleans and Tulane before moving to Howard County two years ago, is constantly becoming a force and her presence makes the Raiders imposing, 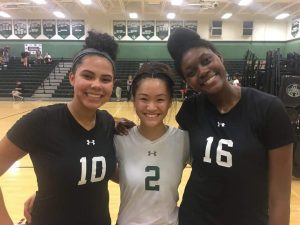 Broadneck was not frustrated and pushed hard in the next set that featured seven ties in the first dozen points by each and the Bruins got within 14-13, before Zoch powered two of her kills and two aces as the Raiders zoomed to a 24-14 lead. An error followed to give the Columbia school the 25-14 victory.

The Bruins worked hard to make the third and final set very competitive. Broadneck trailed by 22-21 and 23-22, but Rorls delivered a kill and served an ace to end at 25-22.

“We need to stay focused on improving each time out,” said Rorls.