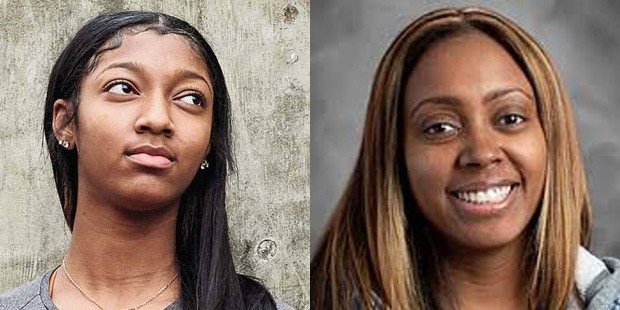 Though the Covid-19 pandemic brought an abrupt end to the 2019-2020 high school girls basketball season we celebrate those who achieved at the highest level on the hardwood this winter with the announcement of our annual VSN Girls Basketball awards.

Arguably the nation’s best player, Angel Reese put the finishing touches on her brilliant varsity career at St. Frances Academy. The senior forward is Player of the Year.

Kendall Peace-Able guided her alma-mater Poly to its finest season. The veteran coach is Coach of the Year.

Please enjoy our honorees’ stories below. 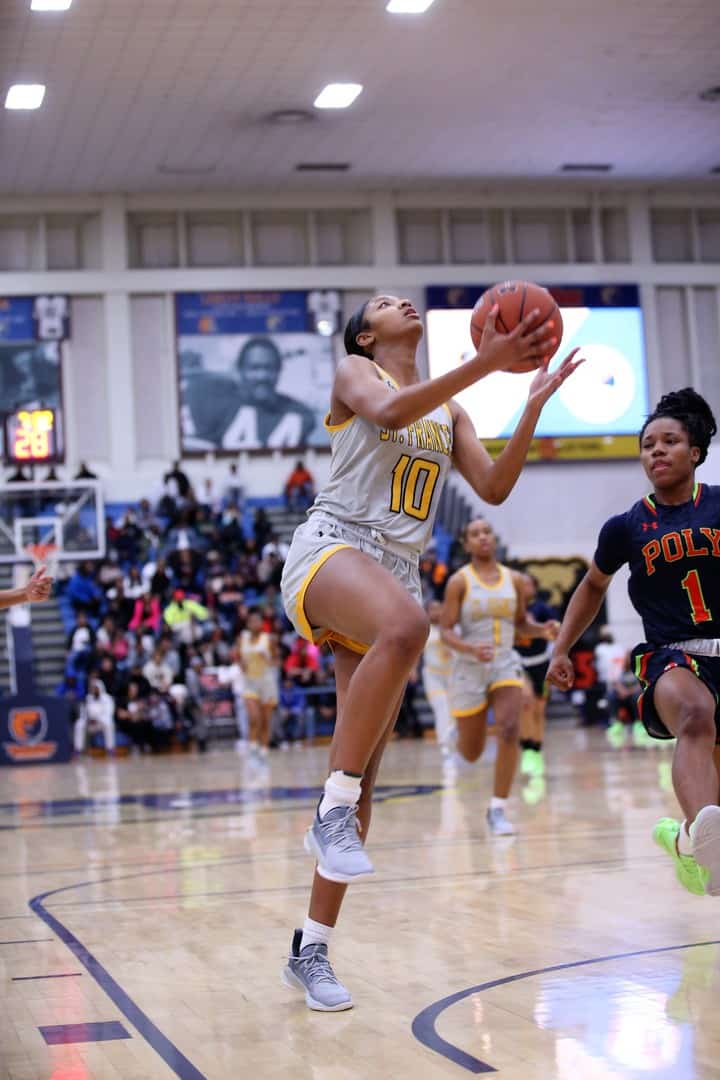 After three years as one of the Baltimore area’s best girls basketball players, Angel Reese knew how she wanted to finish her career at St. Frances.

“I wanted to go out with a bang, of course,” said the 6-3 forward/guard who is headed to the University of Maryland. “I won the (IAAM A Conference) championship three years previously, so I wanted to win all four years, which was a big goal for me. I wanted to show that I was the best not only in the city of Baltimore but in the country and what sets me apart from everybody not just on the court but off the court. And then, I wanted to have an impact going to Maryland.”

She did all of that, earning VSN’s 2019-20 Girls Basketball Player of the Year honors.

From her agility and power as an inside force to her ball-handling skills and eye for her teammates, Reese could — and did — play every position at St. Frances over the years.

“She’s a problem, always has been for four years … when you handle the ball and you’re 6-3. She’s a fun opponent, but she’s always going to be a challenge for anybody to play,” Pallotti coach Joe Mathews said after Reese scored 24 points in a 70-59 St. Frances win in December.

Reese is rated the No. 1 wing in the country by ESPNW and the No. 2 player overall. She was selected for both major high school all-star games, the McDonald’s All-America game and the Jordan Brand Classic. Unfortunately, both were canceled because of the novel coronavirus pandemic.

“Her personal drive to be successful, a tremendous work ethic and an ultra competitive spirit,” are what stood out to St. Frances coach Jerome Shelton. “Every time she got on the floor — if it’s practice, if it’s scrimmages or if it’s games — it means something to her. She wants to win. That ultra competitive spirit, I think, has separated her from a lot of good players.”

St. Frances has already retired her No. 10 jersey.

When Reese arrived at St. Frances, she didn’t start right away, but she said she learned from older players, especially forward Mia Davis, now an All-Conference junior at Temple, and point guard Nia Clouden, who led Michigan State in scoring this season as a sophomore.

The past two years, Reese had been the team leader, using her versatile skill set to lead the team in scoring and rebounds while also looking for her teammates. She will take those skills to College Park, opting for the Terps because of their high-calibre program as well as her desire to stay close to home.

“I really can’t wait to go to Maryland, because right now we lost a few players and a lot of people are counting us out,” Reese said, “and I feel like I have a big role to play being a hometown girl. Coming in as a freshman, of course nothing is going to be easy. It’s different high school to college, the transition. I already know that, so I’m just ready to take on my next role. 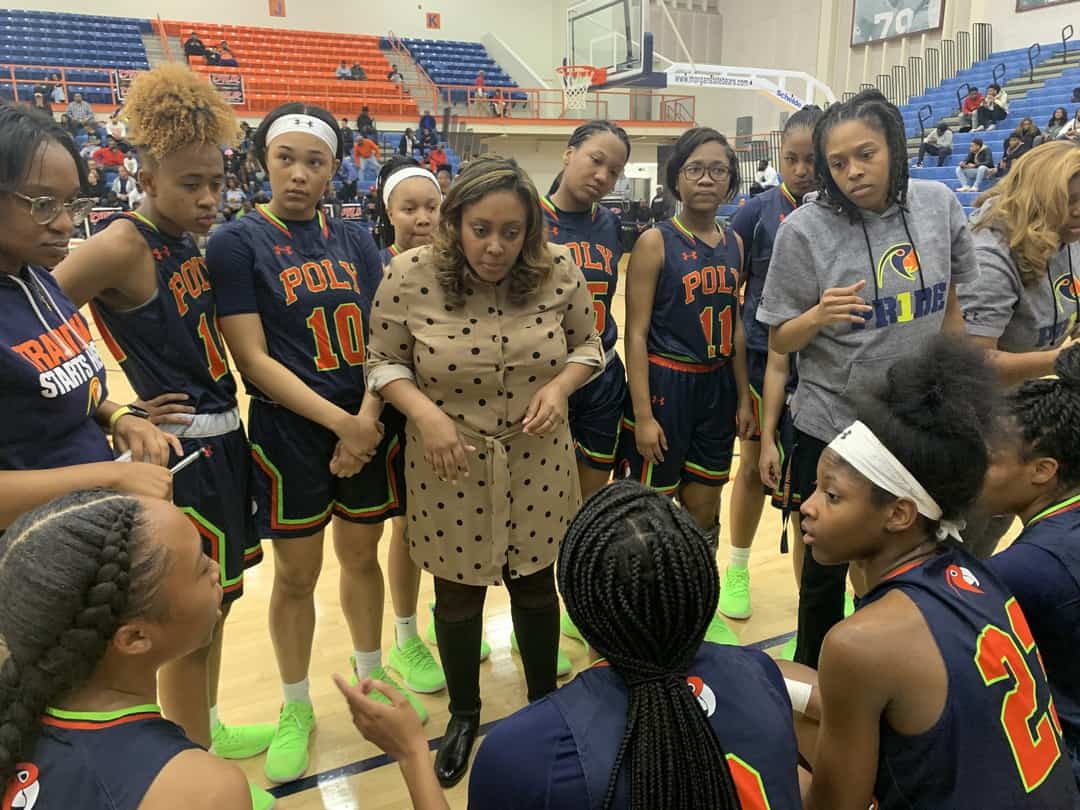 Poly girls basketball coach Kendall Peace-Able certainly thinks a lot about what might have been had the state basketball tournament not been canceled because of the Covid-19 pandemic.

Even without a state championship, Peace-Able guided the Engineers to the best season in program history and is VSN’s 2019-20 Girls Basketball Coach of the Year.

Peace-Able and senior guards Dasia Townes, Jada Gross and Cache’ Wilson had been building toward this banner season for four years and the coach gives her veteran trio a lot of credit for the season’s success as well as the team’s growth over the past four years.

“For the most part, I think their leaderships was it,” Peace-Able said. “Getting adjusted to the rigor of high school basketball [as freshmen] took a little bit, but they started realizing that with consistent hard work, they could be a much stronger unit. I think the friendships that they have established, the rapport that they kept, held in the highest regard with each other was the big difference in this team. We correct, of course, but they correct each other.”

From veterans to newcomers, Peace-Able said, this team was closer than any she’s had in 17 years coaching the Engineers and that camaraderie went a long way toward fielding a team that reflected her team-first, defense-oriented style of play.

“The chemistry of this team was absolutely impeccable. They were more concerned about the goals of the team than they were about themselves and the goals for the team were the ones they created.”

The Engineers suffered their only loss to then-nationally ranked Riverdale Baptist School in early December, a setback that refocused and reinvigorated them.

On Jan. 25, their signature win, 70-63 in overtime against eventual IAAM A Conference champion and then-No. 1 St. Frances Academy at Morgan State University, earned the Engineers the top ranking.

On Feb. 25, they defeated No. 7 Western, 52-48, to win the Baltimore City championship. They then rolled to the Class 3A North regional title, capping their abbreviated season with a 54-25 victory over No. 11 River Hill in the state quarterfinals on March 6.

One of Peace-Able’s biggest admirers is St. Frances coach Jerome Shelton, whom her Engineers defeated for the first time this season. Shelton praised Peace-Able for her coaching style and her ability to recruit strong players to one of the area’s best academic institutions and to help them move on to college programs.

“Kendall, in my mind, is first and foremost a blessing to girls high school basketball in our city and our state,” Shelton said. “She’s a good communicator and she establishes very strong relationships with her players and I think that’s so critical today for a coach’s success. Those are two elements of her success that I think a lot of people should pay attention to who want to get into coaching.”

Peace-Able, a former Engineer who played basketball at Lincoln University in Philadelphia, was assisted by Tee Robinson, Blair Harding, Toby Henson and Crystal Faline. Having spent her entire coaching career at Poly, she has a 347-85 record with 10 trips to the state final four and four appearances in the title game, including last season.