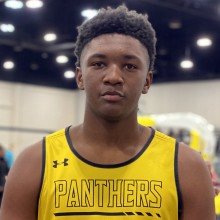 Queen, who is 6-f00t-8, quickly became the most dominant performer in the MIAA/Baltimore Catholic League circuits, leading the Panthers to an undefeated regular season and into the championship game of the BCL Tournament, where St. Frances was upset by John Carroll for the title.

Queen was a force all season, but really burst onto the national radar when he scored 56 points in 99-55 win over Annapolis Area Christian in March.