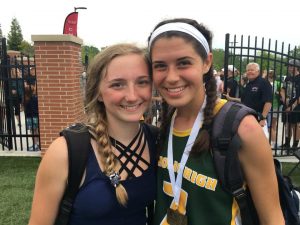 Since its first practice Catholic High was focused on repeating as IAAM C Conference lacrosse champions. It only intensified after losing to Concordia Prep a month ago.

“After the that loss we were going to prove that we were the best team, so all playoffs we just to ourselves ‘Prove It’, prove that we are the best,” Cubs junior attack Sara Morales said.

Saturday, Catholic did just that, posting an 11-7 decision over Concordia in the C title match at Tierney Field at U.S. Lacrosse in Sparks.

“This is awesome, we lost to them [Concordia Prep] earlier in the year so we wanted to prove that we could beat them,” said Catholic sophomore goalie Madison Liggett.

“Everyday at practice, we worked so hard to win this championship and it feels so good that we were able to achieve it,” Morales said. “We knew we played bad in the first game against Concordia and after that game it was our motivation to beat them again.”

Erika Gabrys broke the tie 11 minutes later with a tally from five yards out, sparking a four-goal run. Lexi Grebelski tallied a score off of a rebound from a free position shot and two more scores from Morales.

“A few minutes into the game I saw my teammates go so hard I knew that and I had to this for my team,” Morales said.

“This is a fun team, they work hard, have fun so I just kind of stay of their way and let them play and they did a really good job today,” Catholic High coach Bo Morris said. “They [Concordia Prep] came out very aggressive and really didn’t allow us to run our plays, so we had to open it up and allow the girls to rely on their skills.”

Concordia Prep (14-2) cut the lead to 5-2 when Alex Strohman passed  to a cutting Victoria Lassahn at the 7 minute, 23 second mark. With five minutes left in the first half Catholic extended the lead when Morales scored on a free position chance and another Grebelski in span of 40 seconds for a 7-2 advantage.

Samantha Lassahn tallied the final goal of the first half with spin move to elude a Cub defender and slung the ball into the right corner as the Saints trailed 7-3 heading into intermission.

“We got out to slow start and we just couldn’t back into the game, if we were able to cut the lead down to two, I thought we had a good chance, but you have to credit to Catholic High, they were the better team today,” Concordia Prep coach John Tucker said. “We had a great season and I am really proud of the girls effort.”

Strohman got the Saints quickly on the board to the start the second half when she fired in a goal four outs from the left post to cut the Catholic High lead down to three. The Cubs answered every goal of the Saints with a score of the own as Concordia Prep was unable to get the lead break though the three goal Cub advantage.

Liggett protected the lead for the Cubs, denying three free position attempts. Morales added two goals in the second half with Gabrys and junior Olivia Tuck each adding scores. Junior Sarah Franker, senior Emily Reynolds and Strohman each tallied in second half for the Saints.

The Cubs only lose three seniors as they look to three-peat as C Conference champions next spring.

“The girls are very experienced and we are excited about next year and the future, but we are really happy that seniors could out on top with a championship, that is really special,” Morris said.