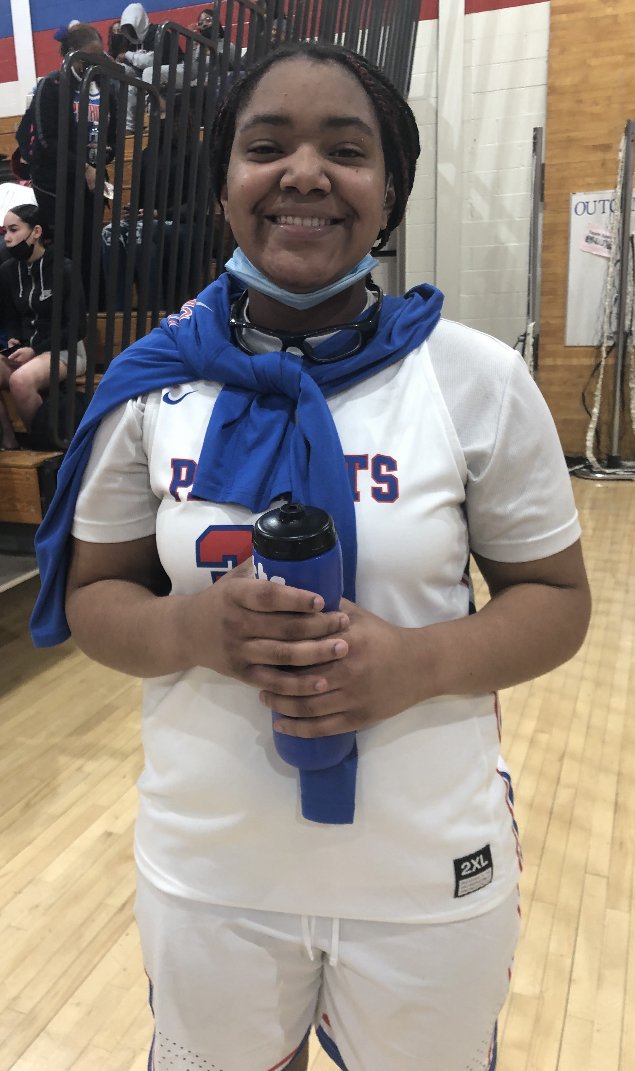 Amani Watts had a big night for Old Mill girls basketball Thursday evening. Watts had 19 points and 19 rebounds as the No. 7 Patriots defeated South River in an Anne Arundel County contest in Millersville.

A sign in the Old Mill High School gymnasium states that the home team “owns the court.”

That was certainly the case and then some Thursday night as the host and No. 7 Patriots used a combination of a turnover-producing fullcourt press, a commanding edge on the offensive and defensive glass, and loads of foul trouble endured by visiting South River to earn a decisive 71-48 victory in Anne Arundel County play.

“This win’s pretty good because they’re No. 2 (in the league standings) and we’re No. 3, so we really needed this to get us higher in the rankings, and it was really a team effort,” said Patriots forward Amani Watts, whose squad improved to 11-1 overall, 10-1 in the county while the Seahawks dropped to 14-2, 9-1. “We did a good job rebounding because the other team wasn’t as big as us and us driving to the basket helped us a lot.”

The play of Watts spearheaded a thorough dominance of the free throw lane on both sides of the court as she finished with 19 rebounds to go with a game-best 19 points, largely on offensive rebounds and stick backs. Nekyla Nkele-Mbai chipped in seven rebounds and Jemirah Brown ripped down five boards in support of Watts, leading to numerous second-chance points for the Patriots while limiting South River to a single look on most offensive possessions.

Old Mill’s overall length advantage at each position also helped force the Seahawks into nearly 30 turnovers against the Patriots fullcourt zone press, leading to a handful of fastbreak baskets and fewer offensive opportunities for South River, which scored less than 15 points in each quarter.

“Our size is definitely to our advantage,” said Old Mill coach Henry Fuller, whose squad led 22-14 after the first quarter, 39-25 at the half, and 58-38 going into the final eight minutes of action. “We always want to run our length to cause problems, especially in the trapping. Their size difference definitely helped us.”

The accumulation of fouls suffered by the Seahawks, including to talented point guard Leila Townsend, also aided the Patriots. Townsend spent much of the contest on the bench before being disqualified with 7:40 left in the game. She was one of a handful of starters who missed significant court time because of foul issues.

“We didn’t do a good job against the pressure during that stretch (in the second quarter that saw his team’s deficit rise to 14 points),” said South River coach Mike Zivic, whose squad was paced offensively by freshmen Ryleigh Adams (16 points) and Reagan Ogle (nine points). “When your point guards are in foul trouble, it’s really difficult. That hurt us. My starting point guard played 10 minutes in the game. That’s my second-leading scorer. That doesn’t help us (but) I was proud of the way they didn’t stop fighting.”

After a slow start offensively by both teams, the Patriots ended the first quarter on an 11-3 run for the eight-point advantage. Amaya Douglas fueled much of that run with seven of her nine points, including a 3-pointer from the top of the arc and a fastbreak layup off an assist from Nevaeh Brown (12 points).

Foul trouble started mounting for the Seahawks in what was a whistle-laden second quarter that saw Old Mill increase its lead to 14 points by halftime. South River was limited to three field goals in the quarter while the Patriots entered halftime on an 8-0 run that included five points from Nkele-Mbai and a 3-pointer from the top of the arc by Nevaeh Brown.

Another late third quarter burst, a 7-0 run, propelled the Patriots to a 20-point lead that was not seriously challenged the rest of the way.

Old Mill, the defending league champs, controlled their destiny for a return trip to the Anne Arundel final. The Patriots are back in action Friday at Northeast.

Next Friday, the Patriots have a rematch with undefeated and No. 6 Glen Burnie in Millersville. The Gophers defeated Old Mill, 56-46, on their home court.