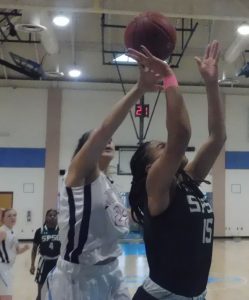 St. Paul’s Laurie Sarchell (15) is denied by Mount de Sales’ Abby Kuhn during Saturday’s IAAM B Conference basketball match. The No. 7 Sailors improved to 7-0 in league play with a 62-48 victory over No. 15 St. Paul’s in their annual Pink Out game in Catonsville

It’s always a special occasion when Mount de Sales Academy hosts its annual Pink Out basketball game, which is a fundraiser for the St. Agnes Breast Cancer Center.
The seventh edition of the event, held on the Sailors’ Catonsville campus Saturday afternoon, was no different from its six predecessors in that it drew a good-sized  crowd, dotted with folks wearing pink in a gym festooned with pink hearts.
For Kristen Zaranski, the game stood out for another reason. The senior posted a career-high 34 points, helping No. 7 Mount de Sales to a convincing 62-48 victory over 15th-ranked St. Paul’s School in a battle of IAAM B Conference unbeatens.
The Sailors (16-3 overall), who lost in the league final last season, improved to 7-0 in IAAM B play. The Academy Road school and No. 20 Mount Carmel (7-0 IAAM B) are now the league’s only unbeatens with a showdown next week.
Mount de Sales can thanks Zaranski for keeping its standing intact. She was most lethal in the third quarter, scoring 11 points during a 13-0 run after St. Paul’s inched ahead.
The deadeye who is especially effective from the corner, not only eclipsed her previous-best single-game mark of 29 points, she also hurdled over the coveted 1,000-point barrier. She now has 1,014 points in her outstanding career.
Typically, Zaranski is joined in the scoring parade by her very able teammates.
“We can have seven or eight kids who can really shoot,” Mount de Sales coach Trish Armstrong said. “Tonight it was Kristen’s night.”
After St. Paul’s used a withering full-court press to wipe out a 12-point second quarter deficit, the Sailors righted the ship when Zaranski converted a layup before burying a baseline 3-pointer and swished a free throw to give her team a 36-31 advantage.
After a layup by Mount de Sales senior guard Maura Devine, Zaranski drilled another three-ball and then converted a perfect inbound pass from senior guard/forward Abby Kuhn (15 rebounds, 4 assists, 3 blocks) as the buzzer sounded to end the third stanza with the Sailors firmly in control, 43-31.
Zaranski’s banner day wasn’t over. The senior guard poured in nine more points in the final period while the their advantage grew to 20 points twice as the Gators fought frantically to retaliate.
“When the game gets more intense, I get in a zone,” Zaranski said about that sizzling spurt in the third quarter. “We were really focused and we had high energy today.”
Trying to away Mount de Sales’ perimeter is priority, and St. Paul’s (11-2, 6-1 IAAM B) did a terrific job in the first quarter. Zaranski got on track with a bomb late in the period before nailing another early in the second quarter.
“We were just losing sight of their girls in transition (defense),” St. Paul’s coach Pat Conrad said. “We were overplaying them, which we do a lot in our man-zone press.”
That press worked like a charm, especially after Sailors floor general Abby Kuhn was on the bench with foul trouble.
“We executed the press well, and we have the athletes to do it,” Conrad said.
The Sailors can play some “D” as well, and it was on display in how ineffective the Gators were from behind the arc.
“They did a great job of running us off the three-point line,” Conrad said. “We just had a poor shooting game across the board.”
Armstrong said that she and assistant coach Dave Slomba devised a way to break St. Paul’s surprisingly effective press in the second half. 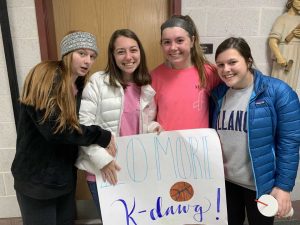 Needing 20 points to reach the 1,000 career scoring point mark, Kristen Zaranski (third from left) overcompensated Saturday. The senior had a career-best 34 points, becoming the first Sailors to reach the milestone in more than 20 years.

“Pat (Conrad) is a great coach,” Mount de Sales coach Trish Armstrong said about her counterpart. “They gave us a different look — one we haven’t seen all year. It definitely caused a little havoc. We had to get Abby (Kuhn) back in the game to settle us down.”