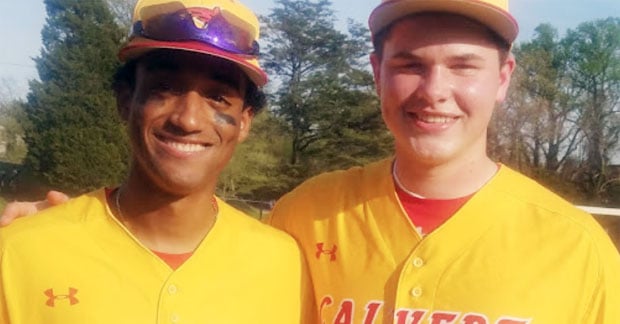 by Joe DiBlasi
Calvert Hall’s Brady Power threw a nifty, one-hit, complete game shutout on Thursday afternoon to lead the second-ranked Cardinals to a 7-0 MIAA A Conference baseball win over No. 10 Mount St. Joseph in an MIAA A Conference game in Irvington.
The Hall (16-3, 11-0 MIAA A) got a two-run homer from shortstop Jose Torres to deep right in the top of the third, and that was all Power would need. It was the second game in a row in which Torres homered to pace the Cardinal offense, as he hit a walkout grand slam against Gilman in his team’s last outing.
Power kept the Gaels (9-5, 7-4) off balance by hittiing his spots with his fastball and his curve.
“It was all about location, said the senior righty,” said Power. “I kept the ball down and outside, keeping it away from their power hitters.
I think we have the best defense in the MIAA and that helps a lot.”
Torres homered to deep right in the top of the third off of St. Joe ace John Torroella, who struck out 11, and only allowed three hits in 6.1 innings of work.
“He got me with a fast ball my first at bat, when he blew one by me and struck me out,” said Torres, a North Carolina State commit who also figures to be selected in the MLB draft in June. “On my next at bat, I was looking for the fastball, and I took it where it was pitched.
“We came out with intensity knowing that we were facing their ace, and Brady (Power) was throwing strikes. We played good defense behind him.”
The Hall added two runs in the fourth, aided by a St. Joe infield error, a hit-batsman, a walk, a wild pitch and a delayed double steal.
They put the game out if reach when Antonio Barranca doubled off of Gaels’ reliever Matt NcManus in the seventh.
Torroella said he just trying to battle all day.
“My baseball was working and so was my curveball and my splitter,” said Torroella. “I left that fastball to Jose (Torres) a little high and he got a hold of it.”
Mount Saint Joe coach Phil Kraska praised his ace.
“John is the ultimate competitor,” said Kraska. “He has great velocity, great control, a great disposition, and a great presence on the mound. Calvert Hall is the best team in the league and he wanted to pitch in this game. We will be looking forward to seeing Calvert Hall again in the playoffs.”
Calvert Hall skipper Lou Eckerl is excited by the play of his team.
“I’m happy with the way we are playing,” said Eckerl. “We’ve tightened up on defense, we pitch well, and we’re scoring a lot of runs.
“I stuck with Brady all the way today, because he spots the ball well, and it’s all about letting your defense play well behind you.”
Calvert Hall continues to march towards locking down the top seed for the playoffs, but the race for the remaining five seeds continue to sizzle. McDonogh (7-3), which was idle on Thursday remains in second, 3-1/2 games behind the Cardinals.
Gilman defeated John Carroll, 5-1, to improve to 8-4 in the conference. They Greyhounds are also 3-1/2 games off the lead and percentage points out of second place. St. Joe, with its 7-4 mark, is in fourth, a half game back of Gilman.
Loyola (6-4) won a wild 10-9 decision over Archbishop Spalding (6-5) and those two squads currently sit in the final two playoff positions, at fifth and sixth, respectively.
Defending champion Archbishop Curley ripped St. Paul’s, 14-0, to improve to 5-7 and stay alive in the playoff chase, while John Carroll is now 4-7 in the conference.
Pictured above: Calvert Hall’s Jose Torres (left) hit a two-run home run and Brady Power twirled a complete game one-hitter in the Cardinals’ 7-0 victory over Mount St. Joseph.
NO. 1 CALVERT HALL 7, NO. 10 MOUNT ST. JOSEPH 0
CH 002 020 3 — 7 4 1
MSJ 000 000 0 — 0 1 4
Power and Landwehr; Torroella, McManus (7), and Looney
2B: CH-McIlhenney, Barranca.
HR: CH-Torres.
WP-CH-Power LP-MSJ-Torroella