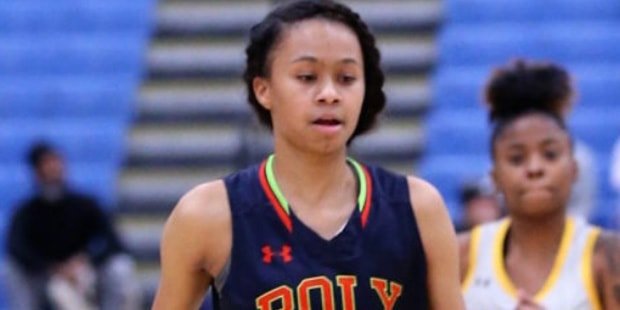 A standout in many sports, this Engineer excels on both ends of the basketball court

As a middle hitter, Poly’s Tenea Robinson had spent almost all of her time on the volleyball court at the net, but when the Engineers’ libero got hurt last fall, she happily added back-row defense to her repertoire.

“I like it more than the front row, only because I feel like you get more touches in the back row than you do in the front row. The setter can’t always set to you,” said Robinson, a rising senior.

Ever since she was little, Robinson preferred sports that kept her moving. She started playing soccer at five, but two years later she switched to basketball, tennis and badminton. After two more years, it was all basketball.

Soccer, she said, was not “hands on” enough although she didn’t mean that as a pun. She just hated being confined to playing only aspect of the game.

“In soccer once the ball goes past a certain spot, you stop. You only do defense — I would only do defense — but in basketball, I could do defense, offense. I could run around the whole court. That’s what I wanted to do,” she said.

A versatile guard with a fearless drive to the hoop, she led the Engineers to an overtime win against St. Frances in January that sealed Poly’s No. 1 ranking. Although she’s better known as a basketball player, Robinson, quickly grew into a critical contributor on the volleyball team after picking up the sport as a freshman.

After one year of junior varsity volleyball, Kendall Peace-Able, who coaches Poly’s basketball and volleyball teams, moved Robinson to varsity where she started as a sophomore. Although she’s small for a middle hitter at just under 5-feet-8, Robinson is quick with a great vertical leap and deceptive power.

“She’s very calculating. It’s not just all a whole bunch of power,” Peace-Able said. “She places the ball well and she’s been a really strong server for us… Normally, I don’t play my middles in the back row, but she is good enough that she is probably going to be a pretty strong defender should we get to play this year. She’s growing into being a six-rotation player.”

Poly senior setter Imani Morris said Robinson has been a great teammate since they started playing together as two years ago.

“The setter and the middle hitter connection is very important and since we started, we clicked instantly,” Morris said. “We’re communicating and talking from the hit or from the serve from the other side of the net to wherever the pass is and when the ball comes to me, she has to know the right tempo, know the right height of the ball and just know where to be. She understands where I’ll be setting and what height I’ll be setting.”

Robinson has played AAU basketball for years, but she said playing volleyball helps her basketball game. Peace-Able said the two are complementary in many ways.

“I think [volleyball] strengthens the reaction time and the lateral motion,” the coach said. “I think she’s already a pretty savvy basketball player, but sometimes the transition is easier for a basketball kid because they already have all the intangibles like sliding on defense, those types of things that you don’t really have to teach. With volleyball being a rebound sport, it kind of makes her a lot more eloquent with that aspect of the game too.”

In Robinson’s two years on varsity, the Engineers’ volleyball season has ended in the same round. As a sophomore, they fell in the Class 3A South regional championship to Huntingtown in five sets. Last season, when the state shortened the regional playoffs to add a state quarterfinal round, the Engineers fell to Bel Air in the quarterfinals.

The Engineers bring back 12 seniors, more than Peace-Able has ever returned, and Robinson hopes they can go at least one round further and make it to the state semifinals for the first time since 2007.

That is if there is a season.

The MPSSAA has postponed fall and winter sports during the first semester when classes will be held virtually. Officials will announce a “hybrid two-semester plan” later this month.

“I was disappointed,” Robinson said of the postponement and the uncertain future for both sports during her senior year. “I feel like we need to start in the summer instead of start next year and have just a couple practices and not live up to our full potential. But I was happy, because there’s still a chance we can still play.”

Robinson has already been through one interrupted season when the state basketball championships were canceled in March. The Engineers had a good chance to win the first girls basketball state title in program history with a balanced veteran team that finished 24-1.

During her freshman basketball season, she was hit hard in the mouth in a freak warm-up accident and suffered lingering headaches that kept her sidelined for a long stretch. As a sophomore in the late January game against St. Frances, she tried to block a layup and caught the opponent’s knee in her chest knocking her backward. She hit her head on the floor and suffered a concussion that kept her out of action until the playoffs.

“I felt honestly guilty,” Robinson said, “because coach Peace put people on varsity who could make a good impact and make each other better. Those other years I got hurt, I felt like I didn’t add anything, so I felt like I owed this [2019-20] school year to myself and my teammates. I made a promise to all of them that I wouldn’t get hurt badly.”

Despite wanting to always be in the action, Robinson blended well into a veteran basketball team that relied on every player. She didn’t have to be the center of attention all the time on a balanced team with terrific chemistry, but she could take over when she needed to.

Her best performance came in the biggest game of the season — and likely the biggest win in Poly girls basketball history — the 70-63 overtime victory against St. Frances that earned the Engineers their first ever No. 1 ranking. Robinson scored 21 points, including the basket that gave the Engineers the lead for good in overtime. She also scored 20 in an early season 74-65 win over city rival Western.

Robinson had also hoped to have this AAU season to further impress college coaches, but she’s only been able to practice with her Maryland Tigers team. She missed a recent tournament after having her wisdom teeth removed.

Carrying a 3.3 GPA and planning to major in marine biology, Robinson has a college list that includes Howard, Delaware, McDaniel and UMES. To keep from worrying about the uncertainly of sports this school year, she’s doing everything she can to make sure she finds the right place to play in college.

“I guess I can’t think about the present right now, because I have to think about my future and if sports would get me into college. Since coaches can’t come out during AAU to look and scout, I’ve been making Hudl highlights. I’ve been reaching out myself, so my future is what’s motivating me right now.”