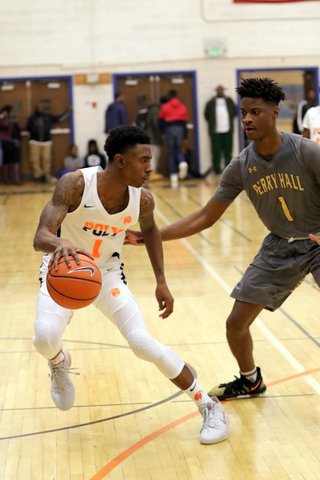 After knocking off then-No. 1 Perry Hall High, Poly is the new top-ranked team in VSN Boys’ Basketball Top 20 poll.
It’s the second time the Engineers have captured No. 1. In February 2016, Poly moved to No. 1 after winning its first Baltimore City title, but in its next match, lost to Woodlawn in the Class 3A North Region quarterfinals.
Perry Hall, St. Frances Academy, John Carroll School and Mount St. Joseph round out a Top 5 that could get a shakeup next week. Tuesday evening, Perry Hall takes on John Carroll at Harford Community College while St. Frances pays a visit to Smith Center in Irvington for a MIAA A Conference/Baltimore Catholic League matchup with the fifth-ranked Gaels Friday night.
There are two new entrants with St. Vincent Pallotti and undefeated Dundalk. Pallotti (17th) won the Bullis Holiday Classic title, extending its winning streak to seven.

Pictured above: Demetrius Mims (with ball) helped Poly get the best of Laquill Hardnett and then-No. 1 Perry Hall last week. The Engineers are the new No. 1 in the VSN Boys’ Basketball Top 20.

Here is the VSN Boys’ Basketball Top 20 for week 2:

This week: at Benjamin Franklin, Dec. 19

This week: vs. No. 4 John Carroll School at Harford Community College, Dec. 19

Last week: The Lakers did not play.

Last week: The Patriots did not play.

Last week: The Millers did not play.

Last week: The Panthers did not play.

Galloway nabs a place in the 3A finals for Poly