After All-State freshman season, River Hill’s Puja Nanjappa keeps getting better at the sport she shares with her father 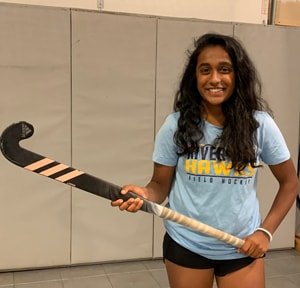 After an All-State honorable mention freshman season, Puja Nanjappa should continue her rise as one of the best field hockey players in the Baltimore area. “Puja’s control of the ball is like no one I’ve seen at the high school level,” said River Hill coach Shelly Chamness.

At this time last year, Puja Nanjappa thought she had enough experience to make River Hill’s varsity field hockey team as a freshman, but she couldn’t be sure.

She had played for her club team for four years, in the USA Field Hockey National Futures Tournament twice and in the AAU Junior Olympics last summer. Still, she wondered how her game would mesh with the veteran Hawks.

“I was so nervous,” she said, “because all of my really good (club) friends who were on really good high schools teams were like ‘I almost didn’t make varsity,’ and I was like, ‘My team might be so good. I’m not going to make varsity.’”

Not only did she make varsity, but she polished off her debut season with rare accolades for a freshman — All-Howard County first-team and All-State Honorable Mention — as the Hawks finished 10-5-1 and reached the Class 3A state semifinals for only the second time in school history.

River Hill coach Shelly Chamness had not seen Puja play before tryouts last August, but she had heard from several sources about a great defender who could start right away.

“The second I saw her, I’m like, ‘She’s not playing defense,’” Chamness said. “She really can do anything, so we wanted her in the midfield so she could help control the flow of the play.”

“Puja’s control of the ball is like no one I’ve seen at the high school level… I’ve had a lot of kids with good stickwork that could go around people and make them look silly, but the way she keeps the ball on her stick and moves it in every direction is really incredible.”

“She’s the real deal,” Ireland said. “When we were playing River Hill, I was really looking for Quinn (Kindbom) who was the senior, and all of a sudden, there’s this player that was on every single ball and I think, ‘Who the heck is that girl?’ She has just great stickwork, really good field sense.”

With her skill, game sense and speed, Puja started right away, playing in the back of the Hawks diamond midfield formation. Chamness had planned to involve her more in the attack, but Puja mostly stayed in her defensive comfort zone.

“She’s a really strong wall,” said her River Hill and Freedom teammate Maddie Vasilios, who also started as a freshman “There’s a lot of impressive things about Puja’s game, but her aggression and how quickly she gets around people are probably most impressive. If someone were to get by a player higher up on the field, she’s there. She’ll stop the person. She doesn’t want anyone to get to the backfield.”

Although Puja likely will push forward more often in her Hawks future, Nanjappa said she has always loved defense.

“It’s just the thrill — you know, when they have the ball and you’re running back, everyone’s cheering you on and you take the ball and head back up the field,” she said. “My goalie’s really hard on me and she cheers me on and everything adds up and it just feels great. You know that there’s no goals going in your goal and even if your forwards don’t score, it’s a tie game. There’s no way you can lose if they don’t score and I love that feeling.”

One of Nanjappa’s favorite practice partners has always been her father, Chandra Nanjappa, who started playing as a middle-schooler in his native India, where field hockey is the national sport. Captain of his college team at the University of Mysore in Kamataka, India, he now plays for the DC Dragons Field Hockey Club.

Puja first enjoyed soccer and her father wanted her to have fun with sports, so he didn’t want to push her into field hockey. When some of his friends on the Dragons team told him their daughters played and suggested Puja try field hockey, they went to a play day. She was 10 and although she played both sports until eighth grade, her soccer career was doomed from that day on.

She excelled right away with the Freedom HKY club. In 2018 and 2019, she earned a spot, as one of the top 21 Under-16 players in the Maryland-Delaware-Washington, D.C. region, to play in the Olympic-development style Futures National Tournament. Last summer, she advanced from there to play in the Junior Olympics. She also competed with her Freedom team at the National Indoor Tournament in 2018 and 2019.

“The first time I played it, I was like ‘I love it so much,’ I went on my driveway and was dribbling the ball back and forth and my dad said, ‘You’re doing it all wrong.’ I was like, “No, I’m not. I can do it by myself. It’s okay,’” she said with a laugh.

Chandra Nanjappa said he helped Puja with her skills but also showed her, as a defender, how to analyze and understand what’s happening in front of her rather than always running toward the ball.

“I think she’s successful at getting the ball because of that,” he said. “I think that’s what she kind of likes, getting the ball from other people. I think she also brought some other skills from soccer. Her passes are very accurate. She kind of knows where the other players are.”

Sarah Dawson, one of Puja’s coaches with Freedom HKY, said playing with girls a year older on her U16 club team has helped her improve not just her skills but her confidence and her sense of the game.

“She has a really good understanding of defense and tackling and decision making on defense,” Dawson said. “She really understands the play, how to stop attackers and on the attacking side, she’s super poised and controlled with the ball. She doesn’t panic under pressure and she can distribute and find the pass or find the foul. She’s just a very controlled player.”

Puja said she likes working with the U19 club players too as she constantly aims to improve her game. She and her father still practice together.

Chandra Janjappa laid tile on the floor and put padding on the walls of the family’s four-car garage to give them an indoor practice space. They’ve used it a lot this spring and summer, during the COVID-19 pandemic that canceled everything until Puja’s club resumed workouts in June.

Puja said she feels more connected to her father through the sport.

“When we play together, it’s really nice because we both enjoy it so much. It’s a lot of fun playing with him on the field. He’s taught me so much. He used to be able to get the ball from me but now he can’t,” she said with a laugh.

Chandra Nanjappa laughs too when he hears that, so there may be some dispute about whether that happens every time. Even if it does, he’s happy she enjoys sharing the game with him. He doesn’t mind the expected differences of opinion between father and teenage daughter.

“People our age play differently. A lot of things change,” he said. “She’ll tell me, ‘Oh no Dad, this is the best way,’ and I’ll just answer, ‘Okay, that’s right.’ The fact is she kind of enjoys beating me.”

Puja wants to play in college and said she believes being a great field hockey player will help smooth her path to a top-level academic school as it did for her brother Anish Nanjappa, a two-time state cross country champion now at Columbia. Of course, her 4.8 GPA should help her even more.

Considering majoring in psychology, Puja said she’s trying to remain positive about the upcoming River Hill season even though Howard County officials have announced they will start the school year online because of COVID-19. While Howard County has made no announcement about sports, Montgomery County has canceled its fall season and Baltimore County and Anne Arundel County have postponed their fall tryouts indefinitely.

“I’m not giving up hope until they tell us, ‘No,’” Puja said, “because that field hockey season was literally what made my freshman year how amazing it was. All the connections I made, all the fun I had, everything about that year was so good. I loved high school because of field hockey. I will not go down with no hope it’s going to start.”

River Hill would have 10 starters back and Puja is preparing as hard as she did a year ago, hoping to help lead the Hawks to their second state title. The program’s first title came in 2010.

It helps that her club team is back in action, preparing for a tournament in early August, but she hasn’t stopped working out on her own, running, doing Zoom workouts and practicing in the garage or at the field.

With Puja’s work ethic, Dawson said, the time off hasn’t hurt her game at all.

“She’s gotten even better,” Dawson said. “Where she used to get tired and maybe make silly mistakes, now she’s tired but she’s making great decisions and she keeps getting better and better. She’s really turning into a phenomenal player.”