No. 10 Dunbar pulls away from Edmondson for Eaton Trophy; Crews-Harris rushes for 201 yards 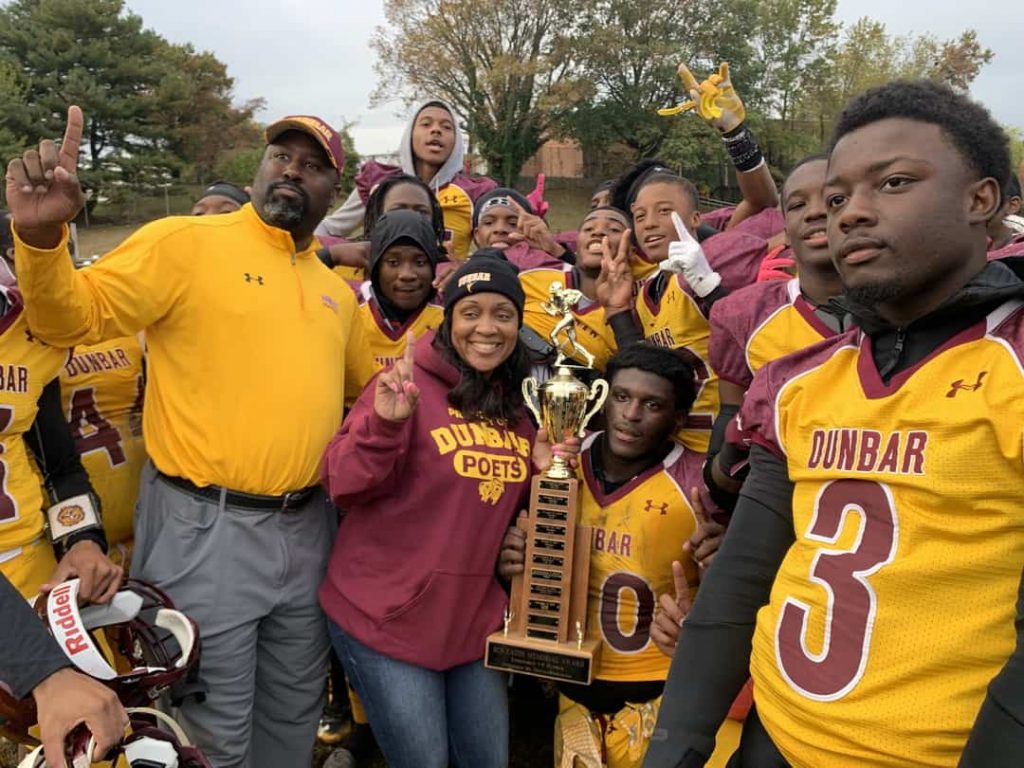 The Ben Eaton Memorial Trophy is back at Dunbar, and the Poet football team is finding its stride.

No. 10 Dunbar defeated Edmondson, 37-12, in a Division I match in West Baltimore. Senior running back Deon Crews-Harris rushed for 201 yards with two rushing and a passing score for Dunbar (7-1 overall, 5-1 Division I),  and sophomore quarterback Karon Moore threw for a score.

The East Baltimore school scored four unanswered touchdowns in the second half to retain possession of the Ben Eaton Memorial Trophy, named after the beloved Poet coach who died suddenly before the start of the 2007 season.

“I wouldn’t be here if it wasn’t for him,” said Smith, who was an assistant under Eaton and succeeded him as Poet coach. “Everything I know on the high school level he taught me. I always want to keep that trophy home. I always tell my new guys about who he is and what he meant.”

Dunbar has won four straight, and 11 of 13 for the Eaton Trophy. The Poets have won seven straight since a season-opening loss to No. 7 Mervo at Poly.

“We’re growing up. We’re a team full of juniors and a couple of seniors sprinkled in,” said Smith. “You better get us this year.”

“That loss really broke us,” said Crews-Harris. “We went back to the drawing board, everyday we’ve been going at it harder in practice, we’re getting better in the weight room. It’s been good.”

Crews-Harris scored on runs of 5 and 66 yards, and threw a 3-yard score to Justin Black out of the Dunbar’s version of the Wildcat formation called “jumbo.” The 5-foot-11 240-pounder broke a 67-yard run to complete his day.

“We’re going to miss him,” said Smith. “He does whatever needs to be done. He’s trying to lead the team to a state title.”

Leading 8-6 at halftime, the Poets opened the second half with a 9-play, 60-yard series as Crews-Harris tossed a throw to wide-open Black in the end zone. On the Poets’ next possession, Crews-Harris got into the open field and outran Edmondson’s defense to the end zone for a 66-yard score.

The Poets’ defense forced a three-and-out, and Moore found Dearius Carr across the middle from 16 yards, extending Dunbar’s lead to 30-6 early in the fourth. On the next play from scrimmage, Khalil Bailey stepped in front of Edmondson quarterback Gabriel Johns’ throw and went untouched to the end zone for a 40-yard pick-six.

Johns threw an 86-yard pass to Marvin Allsup for the Red Storm (6-2, 4-2 Division I). Randy Griffith’s 3-yard run accounted for Edmondson’s other score.

The win strengthens Dunbar’s bid for the No. 1 overall seed in the upcoming Class 1A state playoffs. The postseason format is different as the top eight teams in each region qualifies, and the eight remaining teams after two rounds will be reseeded based on point-average.

The Poets, who were upset in the 1A state semifinals last year, are again considered a title favorite.

“I feel we got it. We’re getting all of our pieces back,” said Crews-Harris. “We’re building and getting better as a team. It should be a good run.”