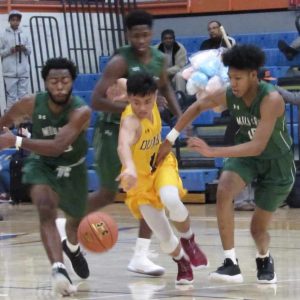 Milford Mill’s Jordan Goodwin (left), Dunbar’s Zephaniah Esguerra and Milford’s Jermaine Goodwin chase after a loose ball during Thursday’s boys’ basketball match at the Basketball Academy. The No. 4 Poets rallied from a 10-point deficit in the fourth quarter to knock off the No. 6 Millers in a battle of undefeated squads at Morgan State University’s Hill Field House.

For most of its match with Milford Mill Academy Thursday evening, Dunbar looked like a team playing its first boys’ basketball contest in two weeks.

Then came the fourth quarter. The No. 4 Poets put together a late charge to pull out a 57-51 victory over the sixth-ranked Millers at the 22nd Baltimore City Public Schools Basketball Academy at Morgan State University’s Hill Field House.

The Knights improved to 8-2 with a 56-37 victory over defending Class 2A state champ New Town. Sophomore guard Mya Henson scored 16 points for the Knights.

The Alameda school grabbed command in the third, outscoring the Titans, 18-10, for a 46-29 advantage. Raquel Nicholson, Travell Gardner and A’janay Nicholson combined for 24 points.

Sophomore Mykiah Ross finished with a game-high 17 points for New Town (5-4), which returns to Hill Field House Saturday for a match with Poly.

The Indians, making their first appearance at the Basketball Academy, play defending Baltimore City Division I champ and seventh-ranked Western Saturday afternoon. Mount Carmel takes on City in the other girls’ contest Saturday.

Woodlawn boys dominated the second half against Hammond, running its record to 9-1. Senior guard Reshaud Garrison poured in 20 points and Mark Brinkley added 15.

Leading 20-19 at halftime, the Baltimore County squad outscored the Columbia school, 41-11, in the second half. The Warriors closed the game with a 24-2 run.

“We started attacking it and made some shots,” said Richardson. “We were struggling with our shots in the first half and told the kids watch the depth perception and hone in on mid-range shots. We stepped out to the perimeter and did fine.”

In its first Basketball Academy, St. Maria Goretti shut down Patterson in the final quarter. Junior guard James Searcy scored 15 of his 17 points in the fourth for Goretti (14-6), and Abdou Tsimbila finished with 12.

With the game tied at 46, Searcy dropped three consecutive 3-pointers, part of a 15-0 run. Searcy had four trifectas in the final frame.

“We just woke up, starting defending and running the floor a little bit better,” said Goretti coach Matt Miller, whose team plays in the Baltimore Catholic League. “We have different guys who can get hot and it was nice they kept finding James.”

Junior guard Gerard Mungo led all scorers with 20 points for Patterson (4-4). Coming off its best showing of the season Wednesday against Lake Clifton, the Clippers managed just a free throw (with 16.8 seconds left in game) over the final 6:25 of regulation.

“We got to correct rebounding and limiting opponents’ runs,” said Clippers coach Harry Martin. “Our zone offense goes into droughts. We got to play four quarters.”

The Orleans Street school outscored the Millers (7-1), 15-2, over the final 2:53. It was first match of the new year for the Poets, whose previous game was Dec. 28 at the Reading (PA) Holiday Tournament.

“We didn’t have our rhythm, missed shots, bad plays,” said Poets coach Diego Jones. “Our defense kept us in it, but we found a way at the end. Defensively, we got stops when we needed.”

Dunbar went ahead, 52-51, after Jared Lewis’ breakaway layup with 1:10 left in regulation. Phillip was fouled going for a defensive rebound and converted two free throws with 56.6 seconds remaining.

Phillip came up a steal after he and Lewis doubled team Milford Mill’s Jermaine Goodwyn in the corner. The senior hit two free throws, extending the Poets’ lead to 56-51 with 41.2 seconds to play.

“It was a total team effort,” said Phillip. “No team in the city can beat us when play defense. The defense was great the last two minutes, but we have to play like that the whole game.”

The Poets didn’t score their first basket until 3:26 left in the first half, and trailed 21-19 at intermission. Milford Mill opened the third with a 7-0 run and led 44-34 early in the fourth quarter.

The Millers led 49-40 with 2:53 remaining in regulation when Jones picked up a technical foul after Deron Hunt was fouled. Hunt converted two free throws, making 49-42, but Milford Mill missed the technical free throws and didn’t score off the ensuing possession.

Malik McCormick dropped a long jumper and Phillips came up with a steal at midcourt and went down for an uncontested dunk, bringing the Poets to 49-46 with 2:10 left in regulation.

Milford Mill went up 51-46 after two free throws from Jordan Goodwin with 2:05 to play. The Millers didn’t scored again, posting just one field goal in the fourth.

“We started rushing, throwing the ball away unnecessarily,” said Millers coach Ryan Smith, who didn’t have key senior reserve Ugo Obasi, who injured his foot in the fourth quarter of Wednesday’s victory at No. 13 Dulaney. 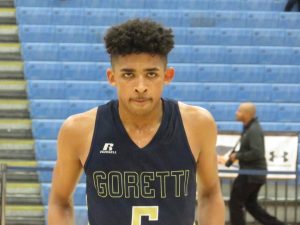 James Searcy went off in the fourth quarter for St. Maria Goretti. The junior scored 15 of his 17 points in the period, including four 3-pointers as the Hagerstown squad knocked off No. 11 Patterson.

“We have to get back to fundamentals and everything else will come,” said Phillip. “We’re a bunch of dogs.” 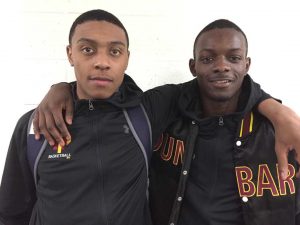 Jamal West (left) and Dashawn Phillip combine for 15 points for Dunbar in its come-from-behind victory over Milford Mill. The Poets play No. 18 Old Mill Saturday on the final day of the Basketball Academy.