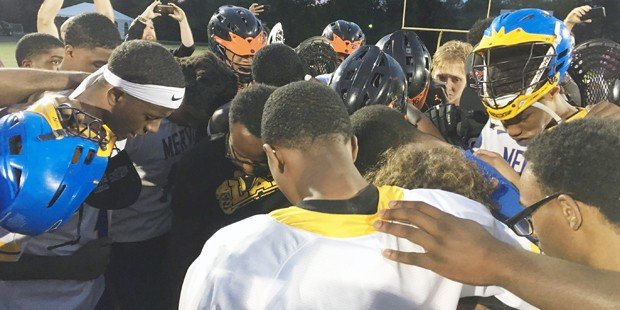 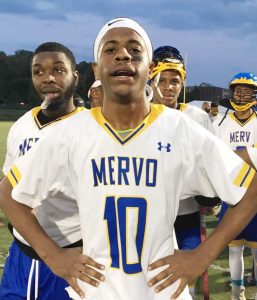 Instead of his customary No. 4, Mervo’s Charles Pitt wore No. 10 in Monday’s Baltimore City Division I boys’ lacrosse final, in honor of his friend and City College defenseman Ray Antwone Glasgow III, who was tragically murdered two days before.

Sorting through all of the emotions Mervo attackman/midfielder Charles Pitt faced in the Baltimore City boys lacrosse final Monday night was no easy task.

After all, Pitt was trying his best to help the Mustangs (10-1) repeat as Division A champions against a City team still reeling from the senseless slaying of a teammate, defenseman Ray Antwone Glasgow III, who was also a close friend of Pitt’s.

And while Pitt didn’t match the seven-goal explosion he produced in a 12-1 win over Douglas in Mervo’s previous game, he still made a significant impact on the outcome by scoring four times in the Mustangs’ 9-7 triumph over City at Poly’s Lumsden Stadium.

He said that “knowing Ray personally……..it was heartbreaking” to hear of his murder on Saturday night.

Pitt said that he and Glasgow played on the same club lacrosse team.

“To see him go out like that hurt me, hurt me a lot,” Pitt added. “You never know when your time is up. I wanted to give it up for him. That’s why I wore his number. He was a good person with a kind heart.”

In the early going, it appeared that City had an emotional edge when it used goals by junior midfielder Rodrick Brown and senior attackman Malik Hamm to bolt to a 2-0 lead with just under seven minutes left in the first quarter.

The Mustangs knotted the score on goals by midfielder Chaz Patterson and Pitt before midfielder/attackman Ramone Alleyn scored three straight times to boost the advantage to 5-2 midway through the third quarter.

City junior Canaan Allison then converted a feed from freshman attackman/midfielder D’Andre Chaney — all 5-foot-1, 107-pounds of him — to narrow the lead to 5-3 before Mervo midfielder Tayquan Busby pumped the lead back to 6-3 on a goal assisted by Pitt.

Pitt and Chaney traded goals to end the third quarter with Mervo on top, 7-4.

Hamm bulled his way around the goal a couple of times before depositing a shot into the net early in the fourth quarter to make it 7-5 before Pitt went inside to convert a Busby feed and then quick-sticked a nice look from Mikal Brown to up the cushion to 9-5 with just over seven minutes left in regulation.

Chaney’s final two goals closed the gap to 9-7 in the final minute.

Afterwards, both teams gathered in a circle to say the Lord’s Prayer in a spiritual tribute to Glasgow’s memory.

“When all the chaos started, I was wondering what our mindset would be,” Mervo coach Martin Church said.

Getting strong efforts on the defensive end from Earnest Georges and Sean Foster playing in front of goalie Ismail Abdul-Ghani helped the winning cause.

City coach Anthony “Merc” Ryan said that playing the game was a matter of his players’ desire to compete for the third time in three years against the Mustangs.

“The kids decided that they wanted to play, and they all did,” Ryan said. “Once the whistle blew, everything settled down.” 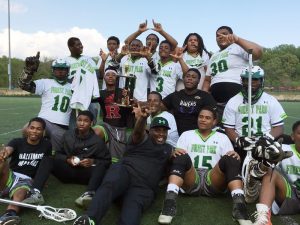 Forest Park gathers to celebrate its 10-3 win over Bluford Drew Jemison, 10-3, for the Baltimore County B Division championship.

In the Division B final, Forset Park senior Justin Leach pumped in seven goals and added an assist as the Foresters beat Bluford Drew Jemison, 10-3.

The score was tied at the half, and then Leach led the onslaught after the intermission by challenging a short-stick defender.

“I had to take over the game,” he said. “And I had to take advantage (of the shortstick). I thought I might as well take it to the next level, and I did.”

Forest Park coach Randy Belton said that whenever he faces a shorty while playing club lacrosse, he calls it “dinner time.”

And he advised Leach to have a hearty meal.

The coach also praised junior defenseman TJ Warrington for his fine play while the Foresters blanked the Rockets in the second half to take the title.