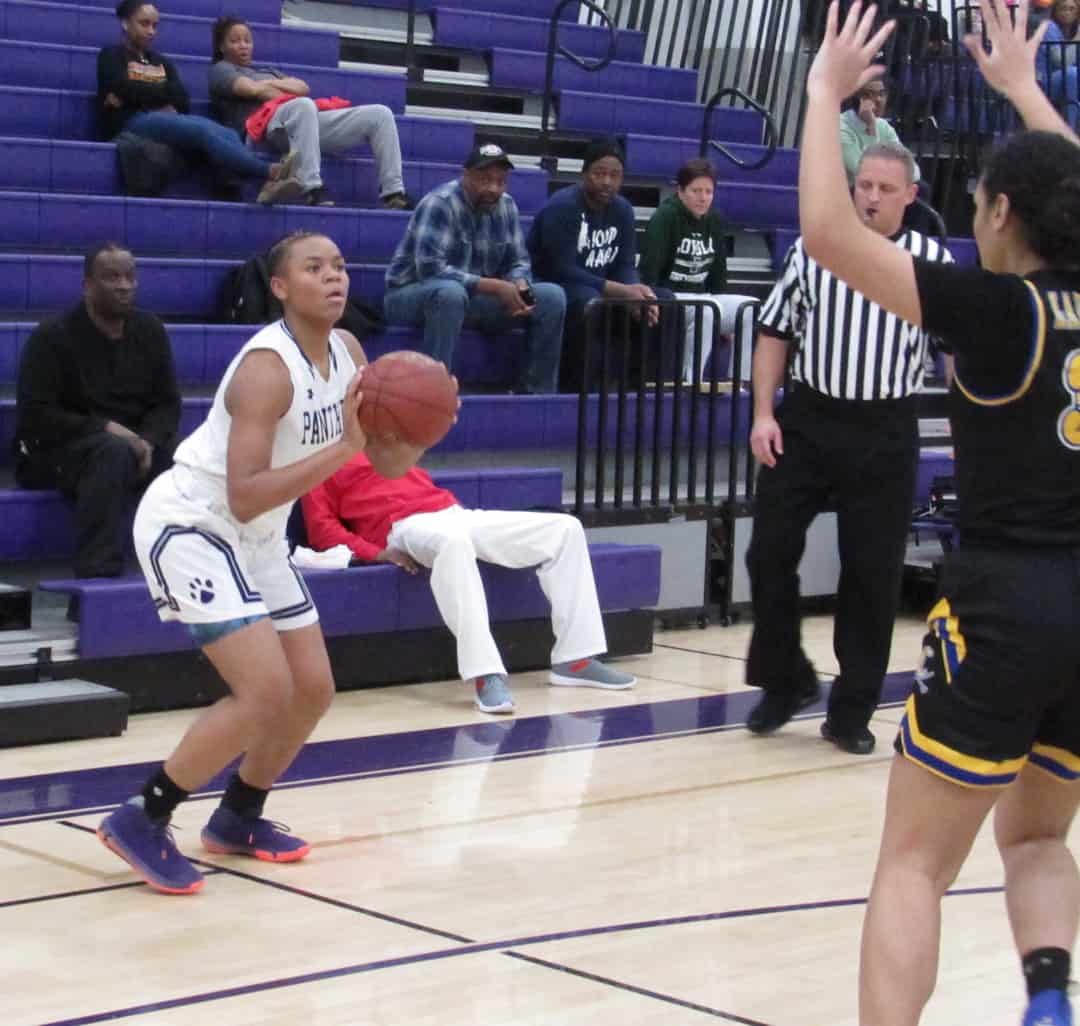 Pikesville’s Kristin Sterling prepares to shoot a 3-pointer as Calvert’s Angie Workcuff defends during Friday’s Class 2A state girls basketball quarterfinal contest with Calvert. Sterling finished with a game-high 25 points as the 16th-ranked Panthers advance to next week’s 2A Final Four at Towson University with a 64-33 victory.

Pikesville High’s Kristin Sterling had arguably her worst game of the season Wednesday. She rebounded nicely Friday and the Panther girls basketball team is headed back to Towson University.

The No. 16 Panthers defeated Calvert from Southern Maryland, 64-33, in a Class 2A state quarterfinal contest in Baltimore County. Sterling finished with 25 points and Tyra Robinson added 12 for Pikesville (22-4 overall).

The Labyrinth Road school hit on all cylinders, leading by as many as 34 points en route to a third straight Final Four berth. Pikesville will meet another Southern Maryland squad, Westlake, in a 2A state semifinal, Friday afternoon at SECU Arena.

Panthers coach Mike Dukes said it was about one thing Friday.

“For us, it was all about defense, defense and more defense,” said Pikesville coach Michael Dukes. “We did a really good job denying them any open looks. We rebounded the ball really well on both ends and our girls were really good right from the beginning.

I thought we came out and played with a lot of energy. It was big night for Kristin Sterling, which was good to see. She had a tough outing against New Town last week and tonight she really had an excellent game.”

Sterling had eight points and was plagued with fouls in the Panthers’ 55-52 win over New Town in the North Region II final Wednesday. The North Carolina University A&T-bound guard was back in form Friday as well as Pikesville, which opened the match with seven straight points.

Calvert (19-6) got to within 14-9 early in the second before the Panthers answered with a 10-2 closing run with Sterling producing inside and out, hitting a pair of 3-pointers in the first half. She had a pair of daggers in the second half.

“I thought once I was able to establish myself inside, that opened up the outside,” Sterling said. “I missed my first couple of shots from the outside, but I’m a shooter. I’m not going to stop shooting. It felt good to hit a few of them. That New Town game was not our best game. Tonight we were playing really good on both ends of the floor.”

Leading 24-11 at halftime, the Panthers kept it rolling in the third period. Pikesville led by as many as 23 points late in the quarter on consecutive three-pointers from Amya Moore and Sterling and a conventional three-point play from Sterling.

Outside of a brief first half run, Calvert was never in the game Friday.

“We just came out really flat tonight,” said Calvert coach Tim Contee. “We just didn’t have a lot of energy in warmups and it carried over into the game.”

After some struggles in the early weeks of the season, Pikesville will take a 12-game winning streak to SECU Arena, where it claimed its second straight Baltimore County title last week.

The Panthers, who won the 1A title last year, will try to become the first Baltimore County team to win back-to-back state title since Milford Mill Academy (won 3A titles in 2014 and 2015).