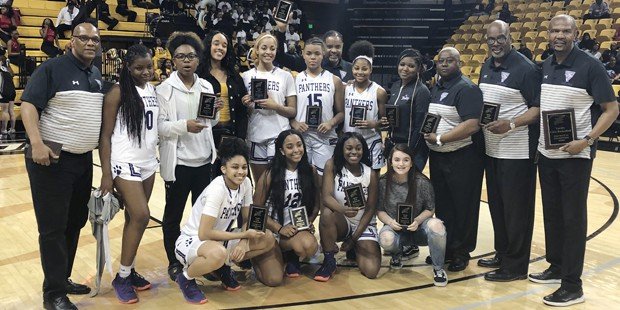 Pikesville High girls basketball coach Michael Dukes does not relax much during his team’s games. He paces, he scowls and is constantly holding his players accountable for their performance.

However, with 1 minute, 39 seconds to play in Tuesday’s Baltimore County Championship Game, at Towson University’s SECU Arena, Dukes allowed himself a moment.

During a break in what would eventually be a 67-45 victory over No. 20 Western Tech, for the 16th-ranked Panthers second straight County title, Dukes smiled a bit as he worked his way up and down the bench, shaking hands with his players and assistant coaches, repeating the words “back-to-back.”

“I took a sigh about that time,” said Dukes as he flashed a big smile. “Yeah, I am really proud of our team.” 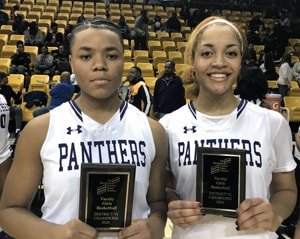 Junior Kristin Sterling (left) and senior Charia Roberts combined for 37 points and each players grabbed 12 rebounds to lead Pikesville to a big win over Western Tech in the Baltimore County championship game.

The 16th-ranked Panthers (19-4) also routed the Wolverines in last year’s Baltimore County title game, but Tech is vastly improved this year and played Pikesville tough in a six-point loss during the regular season. Pikesville, behind the defensive play of senior guard Frances Glover-Bey and the dominance of forwards Kristen Sterling and Charia Roberts, took charge of this one from the outset and were never seriously threatened.

Glover-Bey drew the assignment of guarding Tech’s senior guard and team leader Tiffany Manning and contained her extremely well. Manning did lead the Wolverines (16-7) with 14 points, but six of those came in the fourth quarter when the game was already well in hand.

Sterling, a junior, and Roberts, a senior, were outstanding on both ends of the court, each producing a double-double. Sterling scored a game-high 20 points and grabbed 12 rebounds. Roberts also snared 12 boards and scored 17 points.

Roberts scored seven first quarter points as the Panthers built a 23-10 lead at the end of one. With game tied at 2-2, she scored her first hoop and followed with an old fashioned three-point play to start a 13-3 run for Pikesville. Western Tech fought back within eight late in the quarter, but junior Cydney Barnes came off the bench to score eight straight points, five at the end of the first and three to start the second, to grow Pikesville’s advantage to 26-10.

“We are a really fresh team,” said Roberts. “We have a couple of freshmen and some sophomores, juniors and a few seniors. We have a short roster so its important that we build our chemistry and the fact that we were able to win again with a fresh start is amazing.”

The Panthers led 40-24 at the half and a 7-0 spurt in the middle of the third quarter made it 52-29 for Pikesville’s biggest lead of the night.

According to Dukes, the team prepared well to produce such an outstanding effort.

“We were really expecting a tough game from Western Tech,” he said. “We knew they were going to come in confident and with some grind because of the games last year. I scouted them a few times and those guards are tough. We knew we had our hands full. So, we stressed that in practice over the last week and the girls were definitely up for the challenge.”

Barnes finished with 12 points and senior guard Tyra Robinson netted 11 points in the win. Behind Manning, Western Tech got 10 points each from sophomore Destini Ward and junior Sydney Stokes.