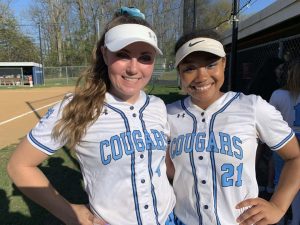 The Cougars (9-1 overall and Anne Arundel) did all the necessities to remain in a tie for first with No. xx Glen Burnie in league play. The top two teams in the standings at the end of the regular season will meet for the county title next month at Bachman Park.

“Everything fell our way, quite honestly, even pop-ups we dropped ended up being outs,” said Cougars coach Don Ellenberger. “The girls played really good defense. For a change, we took advantage of moving runners along.”

Tristyn Stewart went 2 for 3 with a run-scoring triple for Chesapeake, and Sophia Bianco contributed a RBI groundout.

Downin did the rest. The Wilmington University recruit pitched a two-hitter and struck out four.

She did not allowed a runner past second after the opening inning.

“I just tried my best and threw the pitches that are working that today,” said Downin. “I know my defense has my back.”

Wang had three putouts in right field, but the senior set the tone for the Cougars with her bat. With two outs in the home half of the second inning, she drove Falcons pitcher Kylie Dingess’ 1-1 offering over the right field fence.

“We really wanted to beat them and get revenge from last year,” said Wang. “Everybody did what they were supposed to do. There was a couple of mistakes, but we all executed.”

Olivia Driver opened the fourth with a single and stole second. She went to third on Norah Hart’s fly out. Charli Smith groundout to first, and Driver beat the throw home, putting Chesapeake up 3-0.

Wang, who will join the Air Force after graduation next month, leadoff the fifth with a double, and moved to third on Downin’s flyout. Stewart tripled Wang in, and scored on Bianco’s groundout to short.

“The girls executed, I couldn’t ask anything better, obviously 5-0 versus Severna Park, you’re not expecting that,” said Ellenberger. “You’re expecting probably a 3-2 game and hope you’re on the winning end.”

Severna Park managed singles from reigning VSN Player of the Year and Maryland recruit Campbell Kline and Madison Gerard. The Falcons had Kline at third with an out in the opening frame, but Downin struck out the next two batters to retired the side.

Downin retired 14 straight before Abbie LaQuinta reached on an error to start the Falcons’ sixth.

“We just came out kind of flat. We were playing reactive instead of attacking the pitches we wanted,” said Falcons coach Meredith McAllister. “Anytime we play reactive to a good team, they’re going to beat you.”

Dingess and Wilson; Downin and Stewart