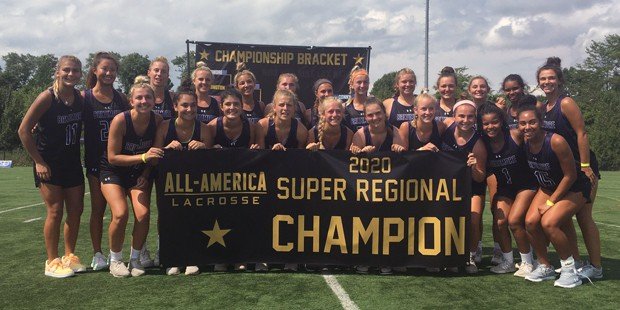 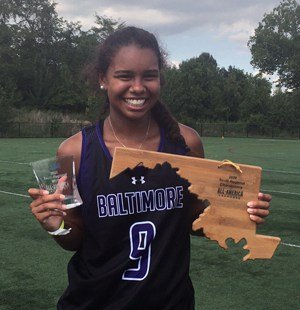 Rising Dulaney senior Sammy White led a rigid backline for the Baltimore Highlight team in the All-America Lacrosse South Super Region underclass tournament Thursday and Friday at Meadowood Regional Park in Lutherville. Her ability to defend and scoop up 50-50 balls to ignite the team’s transition earned her the MVP of the regional tourney.

That’s because the rising senior defensive midfielder from Dulaney didn’t ripple the net for the defending champs and totaled only three assists in the five games the Baltimoreans swept during the two-day event at Meadowood Regional Park in Lutherville.

Even so, White was named the tournament MVP after Baltimore rolled over the South all-stars, 14-7, in Friday’s title match.

Her contributions were many in terms of playing lock-down defense, scooping up ground balls and keeping the transition game moving at a nice clip throughout the contest.

Rowley also pitched in with two assists and Rehkemper and rising junior attacker Caroline Godinbe (McDonogh) had one helper in the victory that qualified the team for a spot in the national tournament against the winners from the East, North and West regions at a date yet to be determined.

“It was much more difficult than I thought it would be,” she said. “We only had one practice, and we haven’t been playing much in the summer (for her Skywalkers club team), either.”

It took a little while until the Baltimoreans adjusted to each other on the field.

“We started the first game and played really well,” White continued. “Then we fell back a little, but we picked it up really quickly after that.”

The South, which nipped Washington, D.C., 12-11, to reach the final, made a game of it early, staying within striking distance and only trailing, 7-4, at the half.

A 5-1 run to open the second half gave the local squad some breathing room on a hot and humid afternoon.

The main difference separating the teams, though, was Baltimore’s talent for picking up balls off the ground and giving the offense enough opportunities to score against South rising junior goalies Julia Dembowitz (Allatoona, Ga.) and Ava deLyra (Wando, S.C.).

“We went hard after 50-50 balls,” White said. “Baltimore is known for winning, so that’s what we were striving for, and it feels awesome to accomplish it.”

Baltimore coach Brooke Shriver said that using all 13 middies on the roster helped to overcome fatigue.

Getting the right combinations on the field was the tricky part.

“Yesterday we started playing better together and then midway through (Friday’s) game we started to make good connections,” she said.

Shriver said that the South posed some problems for her team.

“We were worried about (Dora and Sanders),” she said. “They (South) had a good team.”

“They were just faster than us,” he said. “But I thought we matched them grit for grit. We have a young team and we still kept competing.”