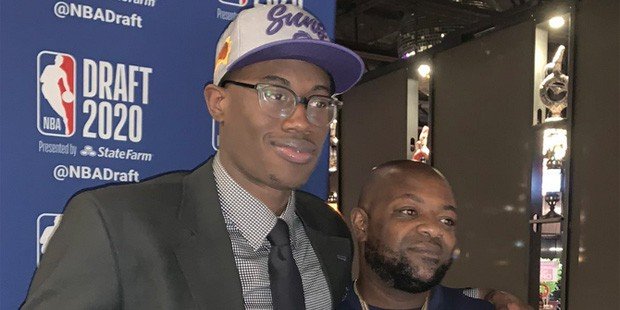 Former Mount St. Joseph High basketball star Jalen Smith, more affectionately known as “Stix”, realized a life-long dream, Wednesday night, when he was selected in the first round of the 2020 NBA draft by the Phoenix Suns.

Smith, who watched the draft with family and friends at a restaurant in Columbia told reporters via Zoom late Wednesday evening his agent provided a major clue he was headed West.

“Right after the pick with Washington, I saw my agent in the background jumping, and he got real excited,” Smith said. “So I was figuring like, OK, Phoenix got me.”

Smith shunned interest from college recruiters across the land to stay close to home at the University of Maryland where he parlayed two strong seasons in the Big 10 into a spot in the NBA lottery, as Phoenix grabbed him with the 10th overall pick.

If there was a knock on Smith coming out of high school, it was his slender frame that led to his nickname. However, he bulked up considerably prior to his sophomore campaign and helped lead the Terps to share of the Big 10 title last winter.

Smith was named 1st-team All-Big 10, to the Big 10 All Defensive team and 3rd-team All-American, last year.

Phoenix receives a player who is a polished shooter, converting 36.8% of three-point attempts, a rare quality in a player his size. He has a high motor and is an outstanding shot blocker. As a pro, Smith will have to continue to work on his body, building more muscle while improving his agility on the defensive end of the floor.

“Thought he was the best fit,” Jones said. “Checked a lot of boxes for us. We want to be athletic, we want to be long, adding length to the perimeter … his versatility to play the 4 and the 5 … switch in pick-and-roll, and more importantly, [can] attack the offensive glass. We thought he gave us an edge in our frontcourt.”

Smith will join a Phoenix squad that could be a potential playoff team in the Western Conference in 2020-21. Guard Devin Booker and center Deandre Ayton is two of the NBA’s best young players and the Suns added veteran point guard Chris Paul, a 10-time All-Star, via trade Tuesday.

“What I bring to the Phoenix Suns is versatility,” Smith said. “…Phoenix thought I was the best fit for them and I feel as though I can work with and I can continue to grow in Phoenix.”

Pictured above: Shortly after learning he was made a lottery pick by the Phoenix Suns, Mount St. Joseph grad Jalen Smith poses for a photo with his former AAU coach Jarvis Thomas.