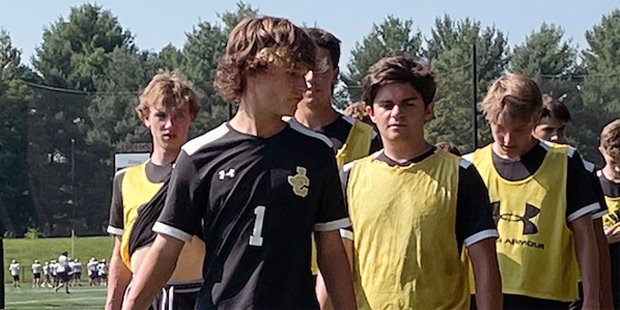 No. 11 Patriots survive a second half comeback by the visiting Friars

No. 11 John Carroll broke a scoreless tie with a pair of goals early in the second half, but needed double-overtime to knock off No. 4 Archbishop Curley, Wednesday afternoon in Bel Air in MIAA A Conference soccer action.
Both teams had multiple close opportunities in the first half, but goalkeepers Tyler Mezzedra for JC and Joey Yachim for Curley made numerous saves in an exciting and open first half.
John Carroll found the breakthrough goal 10 minutes into the second half when Christian Rugel played in Andrew Denard to net the first goal. The Patriots added a second score, 7 minutes later as Ryan Skandalis crossed into Rugel inside 6 yards to score.
The Friars stormed back to score two goals in the last 10 minutes of the game to level the contest and send it to overtime. Brady Geho and Jack Gough both scored unassisted goals coming from set pieces. Tyler Mezzedra made a fantastic stop late in the game on Brady Geho to deny Curley a regulation time win. In overtime, both teams had multiple chances to score but the Patriots netted the decisive goal when Eric Schultz played into Josh Petty who scored from 25 yards.
“It was a really exciting and open game from start to finish,” said John Carroll coach Jimmy Fendryk. “Both teams created so many chances that at halftime my staff and I commented on how the game could’ve legitimately been 4-4 after the first 40 minutes. Some big saves by both keepers kept it level and the pace and intensity just continued through the second half. I thought they had us a few times but some key blocks, tackles, and saves kept us in it. And obviously in tight contests you need that little bit of good fortune to win it. It was a really fun and exciting game to be a part of and both sets of players left it all out there.”
The victory improves John Carroll to 3-1 in the A Conference where they reside in third place. Curley is now 1-2.