Golden goal by Sales secures 3-peat for No. 10 Generals; Gators push past No. 19 Dulaney for girls crown 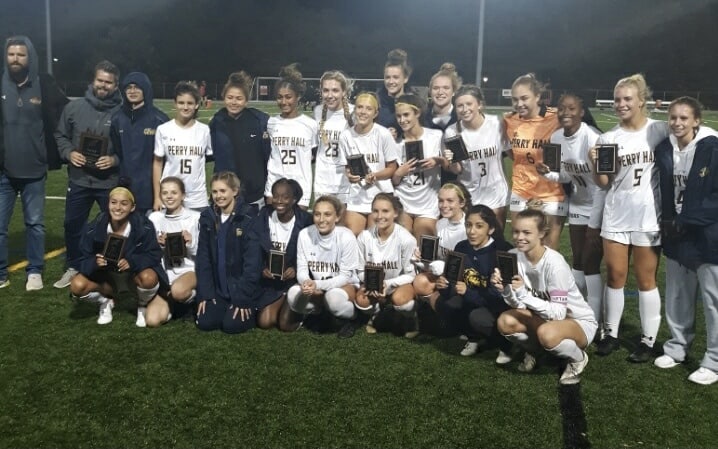 No. 18 Perry Hall held off 19th-ranked Dulaney, 2-1, in the girls contest. The No. 10 Generals won their third straight championship with a 2-1 overtime victory over 14th-ranked Perry Hall.

The Gators (9-6 overall) avenged a regular season loss to the Lions, getting first half goals from Kyleigh Gough and Mariah McQueen. Junior orward Kameron Williams assisted on both tallies.

Williams assisted Gough in the 13th minute of the first half to put the Gators on top early. They extended their lead to 2-0 when Williams passed from the corner to McQueen, who scored from about 12 yards in the 20th minute.

“A point of emphasis for our program is ball control, ball movement, sharing the ball and possession-based soccer,” said Perry Hall coach Matt Smoot. “I thought we melded that together well, possessing the ball but also being attacking-minded.”

Dulaney responded with its only goal of the evening when senior Briana Alvarez converted a free kick with 6:13 left in the first half.

“I just thought their possession was better than ours. They had the ball more than us,” Dulaney coach Maurice Boylan said.

“They’re a solid team, they knocked the ball around really well and they deserve the victory. I’m really proud of our girls’ effort and hopefully next time we play them we get a better result.”

The Lions will likely get another shot at Perry Hall in the Class 4A North Region I final Tuesday. Dulaney hosts Parkville in a semifinal Friday while Perry Hall plays either Western or Catonsville in the other Region I semifinal.

The Gators are riding a wave of momentum with six straight victories.

“It’s been quite a few years since girls varsity has won one (county title), so to have them accomplish that tonight and get their names in the history books,” Smoot said.

The 3-peat is complete for Towson boys, thanks to Zachary Sales. His “golden goal” with 5:09 left in the extra period gave the Generals (12-1) another Baltimore County crown.

“Before the game we talked about this. We worked hard enough to get here that we cannot come here with a loss,” Generals senior midfielder Koshiri Giri said. “We needed a win today, and during the COVID season we beat them for the county championship. Today we wanted to come here and do the same, and that’s what we did.”

Giri scored on a bicycle kick in the fourth minute of the second half from a few yards out off an assist from Jake DelViscio, which was set up by Justin Mealey’s throw-in. The Generals remained in control offensively for the next 30 minutes before the Gators gained a little momentum.

Perry Hall’s Zach Eichelberger split two Towson defenders and worked a pass through to midfielder Brennan Eibner for a goal with 4:17 left in regulation to send the game to overtime.

Mealey came up with another brilliant throw-in, which bounced right in front of Sales, who kicked the goal from close distance to seal another championship.

“This loss stings a little bit but we’ll rebound,” Perry Hall coach Pete Eibner said. “We have a really good team, they’re really hard workers and there’s no quit to them.”

The Gators (10-4) will look to regroup in the Class 4A North Region I semifinals Friday against Dulaney or Parkville at home. Towson has Aberdeen or Bel Air in a Class 3A North Region II semifinal Friday.

“Each day, each week they improved and gotten better so it’s been a real joy to watch these young men blend together,” Dase said. 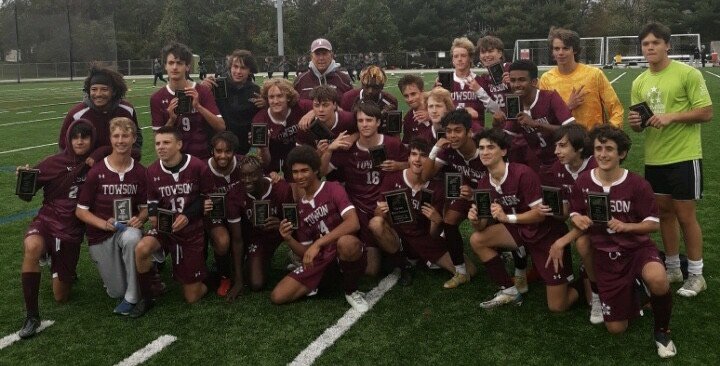