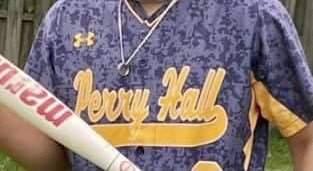 When baseball finally returned to Baltimore County for the first time since the end of the 2019 season, the Perry Hall Gators were ready, claim a 2-0 opening win over Eastern Tech, on Friday.

Senior Anthony Mihavitz started and 4 1/3 innings before giving way to junior Mike Diliello and eventually to junior Jonathan Jiminez and freshman AJ Mendoza to combine for a 1-hit shutout of the Mavericks.
The four struck out 10 ET batters and received some timely defensive plays to keep the Mavericks off the scoreboard.
In addition to his work on the mound, Mendoza had a strong high school debut at the plate. He went 2-for-3 with two stolen bases and he scored both Gator runs.
Senior Devin Bragg had the game’s only RBI
Other hits came from seniors Gavin Chattin and Sean Parsley.