Perfection at the X 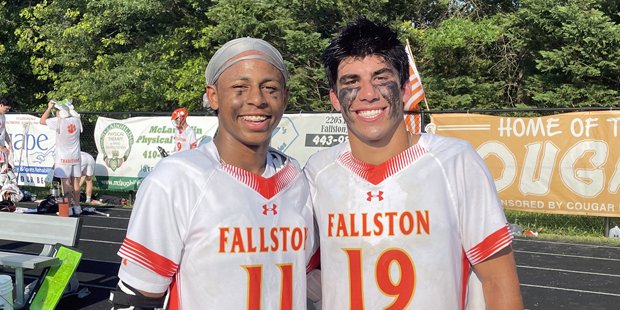 Controlling possession is the ultimate advantage in lacrosse.

Winning face-offs keeps the ball from your opponent, allows you to score in bunches and thwarts any flashes of momentum your rival may try to build. In a 1A Boys Lacrosse State Quarterfinal on Monday, Fallston sophomore FOGO Aiden Dixon was not just good, he was perfect.

Dixon was 22-for-22 on face-offs and it was an advantage visiting Liberty just could not overcome as the host Cougars scored a 12-7 victory beneath a scorching sun in Harford County.

Liberty, which made the trek from Carroll County, was on target early, building leads of 1-0, 2-1 and 3-2 as the pace was furious over the first seven minutes. However, as Dixon continued to win each draw (nine in the first quarter alone), Fallston slowly seized control fo the game.

“I just wake up every morning and do face-offs,” said Dixon in explaining his success. “I don’t honestly know; I just have the nerve. Every time I hear the whistle, I just want to go down, go down and that’s how I get faster.”

“Honestly, in today’s game, Aiden really was the difference,” said Mull. “They were getting some momentum, but they couldn’t build on it because he was just dominating the face-off X. When we had a little run in the second quarter, we were just able to make-it, take-it, because he was winning them so clean.

“As he goes, we go and we are really lucky to have him on our side.”

“Our past two games we had slow starts, so today we were stressing start fast,” said Richard. “That’s what we did. It took everyone – attack, defense, everyone – to start fast. They had three goals in the beginning, but we kept the pressure on them and I think our depth outlasted them in this hot weather.”

Liberty senior goalkeeper Justin Long shook off a slow start to make 11 saves and keep the Lions within hailing distance, but it all came back to Dixon, who finished the day with 23 ground balls to go with a goal and two assists.

Liberty’s top scorer was junior attack Jesse Jackson, who netted three goals and added an assist. Croix Javier had a goal and an assist, while Wille Allen, Trey Williams and Jackson Wright scored once each.

“We are very proud of having made it to the quarterfinals,” said Liberty coach Josh Burchett. “We knew we would have to run into Fallston, either at the quarterfinal or state championship. They have a very good face-off guy and we were not able to answer today.”

Fallston will now move on to face Perryville, a 17-9 winner over Sparrows Point in one fo the other 1A quarterfinals on Monday, on Wednesday at Fallston.

Pictured above: Fallston Aiden Dixon (left) was 22-for-22 on face-offs, in addition to adding a goal and two assists, and Noah Richard had three goals and two assists to power Fallston past Liberty in the 1A State Quarterfinals.