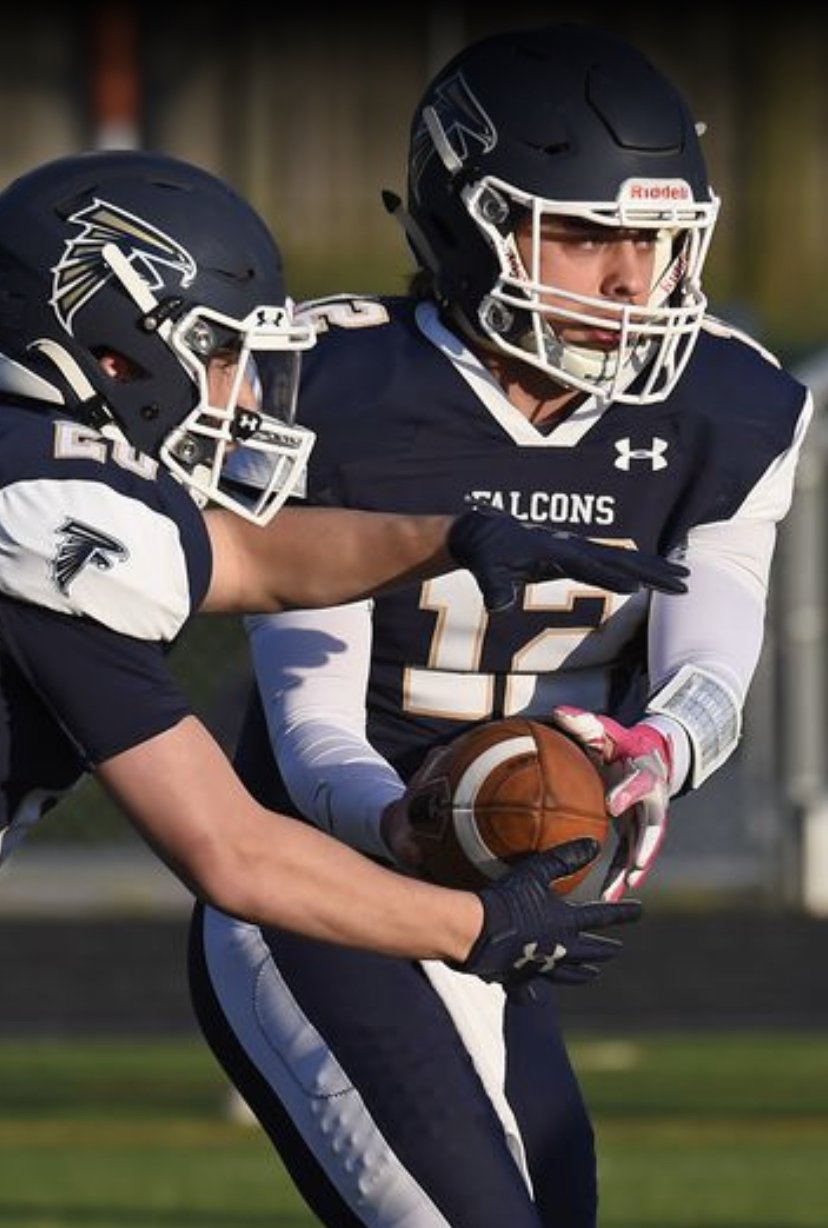 Tears and hugs flooded the Severna Park sideline at the conclusion of Friday night’s football clash with visiting Chesapeake. The tears were not of sadness, however, but of joy as the Falcons capped their abbreviated spring season without a loss in three attempts following the conclusion of their 34-14 victory against the previously unbeaten Cougars.

“It was a just a great feeling to be out there with these boys again,” said Falcons captain Jack Peterson, who hauled in touch receptions of 29 and 32 yards in the win. “We didn’t know if we would be able to play this season. We just wanted to go out undefeated.”

Severna Park did just that despite a sloppy first half and a late rally by the Cougars on second half touchdown strikes of 50 and 33 yards from quarterback Nathan Rosado, who completed 5 of 11 passes for 102 yards in the second half compared to six yards in the first.

“It was better protection, ” said Chesapeake coach Rob Elliott on his 3-1 squad’s better second-half offensive play. “It’s as simple as that. Give Severna Park credit, they outplayed us, especially in the first half.”

Make that largely just the second quarter as the Falcons spent much of the first quarter deep in their own territory as Chesapeake won the field position battle.

Severna Park, however, was able to follow a close-ranged errant field goal attempt, which was tried twice because of an inadvertent whistle, by the Cougars with a nine-play, 89-yard drive that ended on a 29-yard touchdown pass from Seamus Patenaude to Jack Peterson for a 7-0 lead with 8:25 left in the first half.

“I just came out a little nervous, but after the first drive, I was fine,” said Patenaude, who threw for 137 yards and four touchdowns in the victory. “I just really wanted to win for the seniors. They helped me out my freshman year and my sophomore year. I would trust them with my life.”

Patenaude threw a perfect strike to Peterson on a fly pattern down the Chesapeake sideline that Peterson hauled in just past the defender in the end zone.

Severna Park pushed that advantage to nine on a safety with Shane Snyder sacking Rosado in the end zone with 6:28 remaining in the second quarter.

The Falcons had two more quality chances to score late in the half, but they were foiled by two errant snaps that ended a drive at the five-yard line and a lengthy field goal attempt.

“At halftime, we talked about the game not being over until it was the fourth quarter and the scoreboard said 0.00,” Peterson said.

Severna Park showed that determination by forcing a quick out by the Cougars to start the third quarter and then scoring on its first drive of the second half on a 17-yard pass from Patenaude to James Patz for a 16-0 lead for Severna Park with 4:22 left in the third quarter.

Patenaude scrambled to his left and found Patz wide open in the end zone. The same could be said on Patenaude’s next scoring strike, an 11-yarder to a wide-open James Henson III early in the fourth for a 22-7 lead following a failed extra point by the team’s backup kicker.

The offensively challenged first half gave way to a wild fourth quarter that saw both of Rosado’s touchdowns on extremely well thrown balls, another scoring toss from Patenaude from 32 yards out to Peterson and a 20-plus yard interception return by Brett Butz that sealed the game with 2:44 remaining.

Rosado’s first touchdown was a 50-yard pass and run by Rushaun Tongue cut the deficit to 22-7 and the second was a 33-yard strike to Owen Schmidt that trimmed the lead to 28-14. But after forcing the Falcons to punt while using all three of its timeouts, Chesapeake’s chances to further cut into the lead were ended by Butz’s pick-six on third down and 31 yards to go following a holding penalty and a fumble.