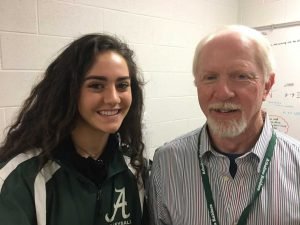 For the second time in three seasons, Atholton High raised the Class 3A state volleyball championship trophy. The Howard County school went wire-to-wire as the No. 1 team in VSN’s Top 20.

Lisa Zoch was the undeniable catalyst for the Raiders’ undefeated season. The senior outside hitter is Varsity Sports Network’s Player of the Year.

Back in the lead seat, Larry Schofield was the steady hand that guided the Columbia school to its finest season. Schofield is Varsity Sports Network’s Coach of the Year. 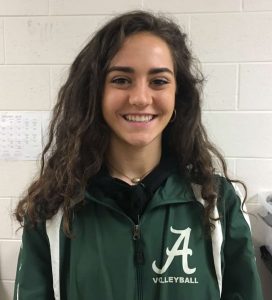 2018 VSN VOLLEYBALL PLAYER OF THE YEAR

Lisa Zoch graciously accepted her call to be the leader of the 2018 Atholton Raiders and led the fun-filled and talented team to its second Class 3A stAte championship in three years. Her leadership and overall ability as an outside hitter has earned the 6-foot senior honors as Varsity Sports Network’s Volleyball Player of the Year.

“I knew coming into this season that I would have to be the leader in my fourth year at Atholton,” said Zoch, who after a very good freshman season with 98 kills was a major contributor to the Raiders’ 2016 3A championshp team with 277 kills.

After last year’s disappointment (lost in the 2017 state semis), we were really focused to win the triple crown coming into this season.”

The Raiders swept through Howard County (11-0 in league play) followed by the 3A East Region title and the coveted state crown, completing a 19-0 campaign and wire-to-wire run at No. 1 in the VSN Volleyball Top 20.

Zoch is undecided on a college choice. She boasts a gaudy 4.54 grade-point average.

On the court, Zoch had 243 kills on the season and 796 for her four-year varsity career. The lanky and strong Zoch used her long arms to frequently dominate opponents with her strength and finesse. She could blast a kill or perfectly place a point.

Zoch, who also had 131 digs this fall (610 career), and had an outstanding serving percentage of 89.6 percent. She rallied the Raiders in their state semifinal versus eventual No. 2 Westminster. The Owls took the first set by 26-24, only the second time the Raiders had lost a set this season – the other a 3-2 victory over No. 6 Arundel back in September.

The Raiders, who exuded confidence a la their leader Zoch all season, literally came dancing back (a little dance to the music on the PA system especially Neil Diamond’s Sweet Caroline between sets) with seemingly no worries and a “we’ll take care of this and get it done attitude,” and put the Owls away.

Zoch finished with 16 kills as the Raiders ripped off three straight set wins. She posted 14 kills and 14 digs as Atholton swept No. 8 Bel Air in the state final.

“We really enjoyed playing with each other and had a friendship on and off the court, in the school hallways and with coach ‘Schoatch’ (nickname for Larry Schofield),” said Zoch, who vows to continue working hard to be ready and get better wherever she ends up for college.

Simply put, Zoch has what it takes. 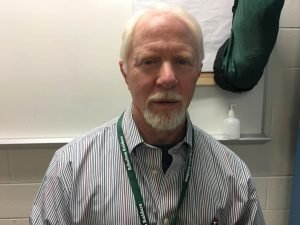 There’s no doubt Atholton High volleyball players love their coach Larry Schofield, also known as “Coach Schoatch.” More importantly, they respect the veteran coach and had full confidence in him to guide them to another championship season.

Schofield is Varsity Sports Network’s Volleyball Coach of the Year.

The Raiders went wire-to-wire as the No. 1 ranked team in the VSN Volleyball Top 20, copping the triple crown – Howard County, 3A East Region and 3A state titles – en route to a 19-0 record.

The Columbia school capped its campaign with victories over Westminster (3-1 in state semifinals) and Bel Air (3-0 in state final). The Raiders posted sweeps in 17 of 19 matches this past fall.

After serving as an assistant and junior varsity coach under Robert Moy, who led the Raiders to the 3A state title in 2016, the two switched roles in 2018. Schofield is the first coach to win state titles at two different schools, having led Centennial to the 3A championship in 2008.

Schofield had been a longtime assistant to Mike Bossom as the latter amassed a record eight state championships at Centennial. Schofield guided the Eagles from 2007 to 2014.

Schofield later moved to Atholton and has played a major role in making Atholton a volleyball power together with Moy.

“I had a great group of girls here at Atholton, many who I had coached on JV and we had a couple great players in juniors Jessica Humphries (5-foot-9) and Chanelle  Smith (6-2) who transferred in from out of state and contributed quite a bit to our success, ” said Schofield, a youthful 67.

“And of course we had a great leader like Lisa (Zoch, VSN Player of the Year), who meant so much to this team and other seniors like our libero Elise Park and setters, Hannah Duncan and Sabrina Lagomarsino and senior MB Wande Sogbesan,” added Schofield. “The future is bright with our returnees including sophomore Ryan Rorls (5-9) who also had a very good year.”

The future is also bright because of Schofield, a retired teacher who substitutes at Atholton.

“Coach ‘Schoatch’ worked us hard,” said Zoch, when asked how laid back was Schofield, whose somewhat low-key and cheerful demeanor belies his intense streak.

You can’t judge the Schofield book by the cover according to Zoch.

“He comes up with all sorts of drills and keeps on us at practice. I know when you watch us you might think that we have so much fun, and we do, but it doesn’t mean our coach doesn’t work us hard. Believe  me, he does and you see the results.”

Schofield is a firm believer that you play the way you practice. He didn’t mind when his squad would dance to the song “Sweet Caroline.”

“Yes, they had a lot of fun, but they stepped up when it was time,” said Schofield.