Standout freshman distance runner is even quicker on the pitch 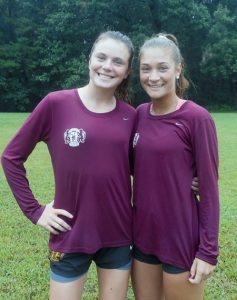 Unlike all but the most elite freshmen athletes, Payton Patrick had her choice of playing two different varsity fall sports when she entered the ninth grade at Hereford High School earlier this week.

After all, running is in her blood — or at least in her bloodlines, considering her dad was a member of some high caliber track and cross country teams at Dulaney in the 1980s and her grandfather was a world-class performer for the elite Villanova University track program coached by the legendary Jumbo Elliott in the mid-1960s.

Although Dave Patrick Jr. never matched his father’s ability while competing for the Lions, very few competitors anywhere were as good as Dave Patrick, Sr. when he was at Kenwood High in eastern Baltimore County before joining the Villanova Wildcats in suburban Philadelphia.

As a senior, Dave Patrick, Sr., who once graced the cover of Sports Illustrated magazine, led Kenwood to its only state track crown in 1964 while winning the 800 (meters) and mile titles after claiming the individual cross country crown, which was held, even in the fall of 1963, at Hereford High.

At Villanova he was even more dominant, producing three sub-four-minute miles (the first Marylander to break that barrier) and capturing NCAA titles in the 880 (yards) twice, the mile and 1,500 (meters).

With all of the family running lore in mind, Payton Patrick still chose to play soccer this season for the 19th-ranked Bulls, and her coach, Brad Duvall, and Hereford captain, Kara Schmidt, are happy to have her aboard.

An abundance of skills, speed and endurance make Payton, who scored twice in a 7-0 verdict over Patapsco in her varsity debut, a force to be reckoned with by opponents and admired by teammates.

However, for a newcomer to immediately find her footing at the varsity level is never an easy task.

That’s why Schmidt’s role is so critical in keeping the team on the same page and the fleet-footed rookie forward under her wing.

“Kara was a captain for us last year for a really good team and is a captain again this year,” Hereford coach Brad Duvall said. “She’s one of our central midfielders who really runs the field for us. She’s not a huge goal scorer — she’s more of a distributor, more of a setup player — but she did score a game-winner for us late on in overtime when she was a sophomore, so she has a nose for the ball. She also does a great job defending and is really just a complete player.”

Schmidt’s willingness to do everything to make her team succeed automatically makes her an influential figure on the team.

“Her leadership is something we just can’t replace,” Duvall adds.

Other Hereford players who help to make the team click are Senior Erin Williams and juniors Rachel Saunders and Lily Robertson.

One senior who figured to play a key role for the Bulls was senior Danielle Maggio, who injured her knee in a scrimmage and will miss the entire season.

And that, in turn, means that more of the scoring load will fall on the 14-year-old Patrick’s shoulders.

Duvall said that Patrick has what it takes.

“Payton coming in new and relatively unknown for the most part brings a lot of speed — she’s extremely fast, with or without the ball,” Duvall said. “The other day, with the ball in a scrimmage against Manchester Valley, she just ran by four defenders and they couldn’t catch her when she was dribbling.”

Schmidt said that the making the transition to having Patrick in the lineup has been very smooth.

“We’ve adjusted really well,” the Salisbury University commit said. “We’ve known each other for awhile (through her younger sister). Knowing how good she is coming in, we obviously wanted her to be on the soccer team.”

Patrick takes a counter-intuitive view of how running and soccer complement each other.

“I feel like soccer helps more with running than running helps soccer,” she said.

Either way, Schmidt said that finding Patrick on the field is easy.

“(Because) she’s able to beat everyone down the sideline,” Schmidt said about lofting long passes to Patrick when Hereford is in full attack mode.

The Bulls will learn much more about themselves and where they stand when they host No. 3 Sparrows Point on Thursday in Parkton.

“If we do beat them, that would be a very big deal because everyone would hear about it and we’d get recognized a lot more than we thought we would,” Schmidt said.

“Playing against (Sparrows Point star) Julie Lynch would be like once in a lifetime,” Patrick said. “It will be a great experience. But if we don’t win, we just move forward.”