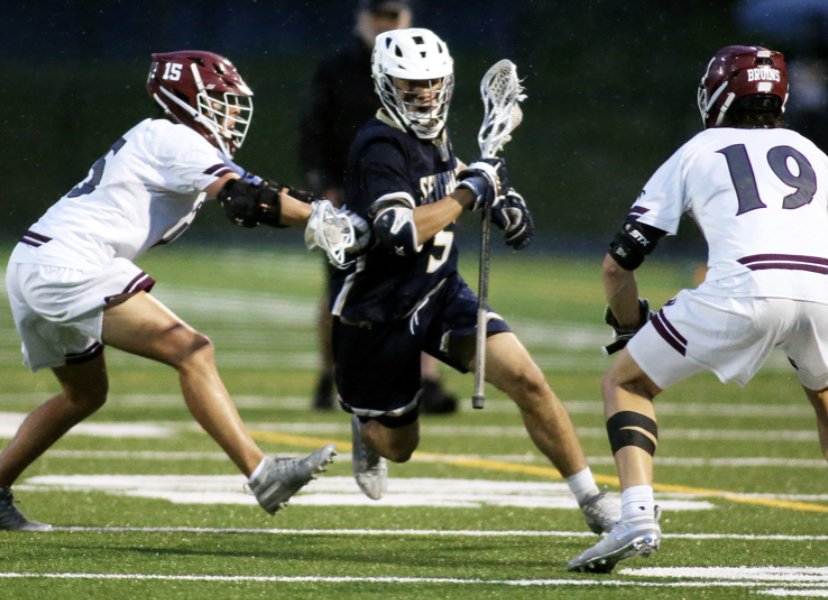 A couple of weeks ago, Broadneck High boys lacrosse connected with a huge first punch in its neighborhood rivalry with Severna Park.

Severna Park ran off six unanswered goals in the second half, paving the way to a fifth straight title for the Robinson Road school, which had a 61-game winning streak (including playoffs) against Anne Arundel County foe ended by Broadneck at Roberts Stadium April 28.

Monday night, on the Bruins’ home turf, the champs flexed.

“They’re a great bunch of guys. In the locker room, we’re a family,” said Falcons coach Dave Earl, whose squad improved to 11-4 with the win. “They’re just really, really good people, really hard workers. I think they earned it tonight.

“I think early on–how many saves did their goalie have early? I don’t think we were putting it in the back of the net. Our offense was working. We were getting good looks and they just started to fall a little bit more.”

Severna Park’s shots, in fact, started falling a lot more in the pivotal third quarter that opened with back-to-back scores from Broadneck’s Jackson Shaw and Davis Fisher to cut the halftime deficit to 6-4.

The momentum quickly shifted back to the Falcons, however, following a one-on-one goal by Sealey with under nine minutes to play in the quarter. Nolan Zborai (two goals) followed with a goal as Ruppert found him cutting toward the front of the crease for an 8-4 lead that grew to 11-4 by quarter’s end following two goals from Villagomez and one from Kevin Bredeck (two goals).

Villagomez twice scooped up loose balls and turned them into goals. The first was a deflected shot and the second was on a defensive strip that he turned into a fastbreak score. Bredeck also transformed a pair of ground balls into goals in the second half for a 12-4 lead early in the fourth quarter.

It’s a game of runs, and they made a big run. We tried to chip back, but then a lot of 50-50 balls in our area, they were able to pick up and dunk and then a lot of easy clears.”

After a sloppy first quarter that included at least one close-range miss from both teams, six saves from Colin Gray (nine saves), and eventually a 1-1 deadlock, the Falcons erupted for five unanswered goals for a 6-2 halftime advantage. 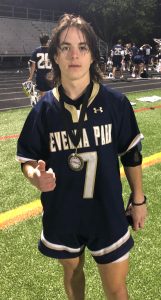 James Ruppert and Severna Park put together an impressive retort Monday evening. The senior attack finished with two goals and three assists as the Falcons avenged a home loss to Broadneck two weeks ago.

Sealey started that rally with a one-on-one drive and score at the 11:10-mark of the second quarter. Ruppert hooked up with Zborai on a nifty pass over the goal for a 3-1 lead with 8:53 left before halftime.

Ruppert then scored in traffic off an assist from Nolan Grizzle, and Sealey ripped home a long shot for a 5-1 lead with 4:37 left in the half. Ruppert struck again in a mass of humanity for a five-goal lead before the Falcons conceded a goal to Broadneck’s Ryan Della with 1:23 left in the half.

The Falcons, who will begin their quest for a sixth straight state championship Friday in the 3A South Region II semifinals, were locked in Monday.

“Our defense held it down and that gave us an opportunity to get the ball down at the other end and put us in a good opportunity to finish,” said Ruppert, whose team out-shot Broadneck, 42-20. “We played them before like a week or a week and a half ago and they beat us, but our team came together as a family, and we were able to take it over. We were fueled up.

We were in a bit of funk, but I think this game really brought us together and motivated us to go all the way to the top.”