Just when Smithsburg High was giving its fans reasons to believe it could stay relatively close to Patterson Mill in the Class 1A boys’ lacrosse state championship game on Tuesday evening at Stevenson University’s Mustang Stadium, the Huskies made it perfectly clear they were not about to miss an opportunity to earn the program’s first state title.

Patterson Mill (13-6 overall) was following the lead of its girls team — it won the opener against another opponent from Washington County, Boonsboro — by breaking open a close game in the second half to dispatch the Leopards, 18-8.

From the time Zachary Healy converted a feed from Zach Brown to notch his only goal of the game to cut the Huskies’ lead to 7-6 early in the third quarter, the Harford County school outscored Smithsburg (14-3), 11-2, the rest of the way to win easily and set a state record for goals scored by a 1A team.

Pikesville set the early standard by scoring 17 goals in the 2001 state finale.

One of the reasons for the explosion was due to a strategic move on face-offs by Patterson Mill coach Jason Bellamy, who moved long-stick Jakop Lowery to the ‘X’ after the Huskies split the first 14 draws.

“We started winning the lions’ share of face-offs,” Bellamy said.

Did they ever. After the maneuver, The Huskies’ won the face-off battle, 11-4.

And with more possessions, the floodgates opened, big-time.

It started with senior attackman Blake Tallon scoring the fourth of his career-best six goals on a feed from junior midfielder Kevin Dyke to start the ball rolling with just over four minutes remaining in the third quarter.

By the end of the period Tallon would strike again while Dyke would also find the range alone with junior midfielder Matt Gallagher to offset a Brown goal.

Leading, 12-7, entering the fourth quarter, the Huskies weren’t through yet.

Goals by Dyke and junior midfielder Connor Madsen preceded Tallon’s final tally, bloating the margin to 15-7 with just under 10 minutes to go in regulation.

Smithsburg’s Healy, a senior attackman, said that the atmosphere at a state final game was a bit overwhelming for him.

“I had butterflies the whole game,” he admitted. “I’ve never been in a game like that. There’s a lot of things I would have done differently.”

After bowing in the 2011 and 2013 finals, nabbing the Harford County school’s first boys state title in any sport was a special moment for the Bellamy and his players.

“We’ve had some really good boys teams here,” Bellamy said. “This is an interesting group. They compete, they like challenges and they hold each other accountable.”

The Huskies also clamped down on the Leopards defensively in the second half, with Lowery, juniors Mitchell Rainwater and Evan Ehly and sophomores Jack Brown and Chris Blackwell leading the long-stick brigade.

“This is a talented team,” Bellamy said. “We had to play against a lot of bigger schools, so we really had to do our homework. They handled the off-the-field-stuff really well.” 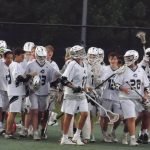