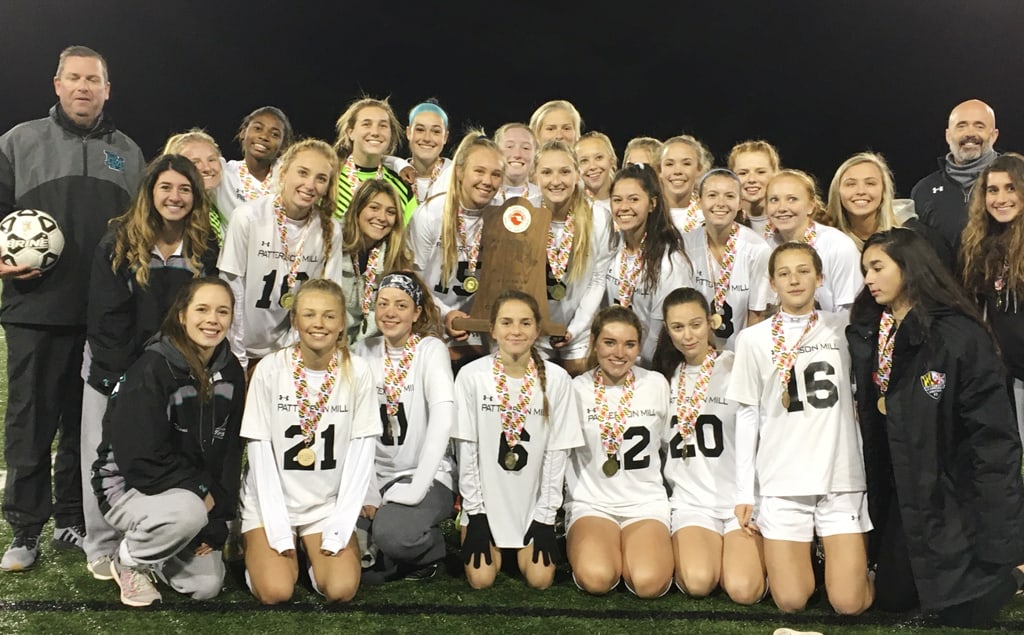 Of all the times for the Patterson Mill High girls soccer team to earn a state title, 2019 might be the most unlikely year for the Huskies to claim a crown.

“We didn’t play any 1A teams during the regular season,” said Patterson Mill coach Mike Parker, adding that his squad even scrimmaged No. 1 and IAAM A Conference champ McDonogh School in the preseason to test the Huskies’ mettle.

“Obviously, we got off to a rough start to the season,” Patterson Mill senior defender Evie Wysong said. “And, honestly, I was a little worried.”

To say things turned around in the playoffs is a major understatement.

Patterson Mill simply barreled through its first three opponents by a combined 9-1 score and then avenged a loss to Smithsburg in last year’s state semifinal by eliminating the Leopards, 1-0, to earn a berth in the final on Thursday night at Loyola UniversitY’s Ridley Athletic Complex for the first time since bowing to Sparrows Point in the 2015, 2016 and 2017 championship matches.

In the final, Patterson Mill maintained its playoff momentum against upstart Loch Raven (8-11), which made its last championship appearance in 2009 when former coach Parker led the Raiders to a title and Loch Raven coach Anthony Menagatti was his assistant.

“I saw Anthony last week before their game against McDonough (of Charles County),” said Parker, who led Loch Raven to a pair of co-state titles before securing a solo crown in ’09. “We worked together the whole time I was there. It was cool to get good luck wishes from Patterson Mill and Loch Raven alums. It was pretty special.”

However, Parker did not allow sentiment get in his way of guiding Patterson Mill to its first state banner.

The Huskies dominated play in the first half and then maintained a steely resolve in final period to topple the Raiders, 1-0.

After earning a slew of corner kicks in the first 19 minutes, Patterson Mill cashed in on the sixth one when junior defender Madison Dawson received a ball in the box from a corner kick by senior midfielder Riley Brown and deposited a 4-yard shot into the net for the game’s lone goal.

“I was going to try to head it,” Dawson said about scoring just her second goal of the season. “But then it went over my head. Then I decided to slide and hoped I would be able to get (a shot off).”

“We were a little challenged in the first half,” Menegatti said. “But we played better in the second half and started to put more pressure on them.”

“I felt we played tentatively in the first half,” Loch Raven’s leading scorer, senior back Julie Rose, said. “We were definitely taken aback because we like to play a diamond in the back and they had more strikers than we’re used to. So we had to make adjustments on defense by stepping up the pressure and closing the gaps.”

Loch Raven, which breezed through it first three playoff encounters against Pikesville, Western Tech and Fairmont Heights before edging McDonough, 2-1, in a semifinal, only managed one shot on goal in the second half after being blanked in opening stanza.

The Raiders’ only serious offering was unleashed by freshman striker Haley Gordan with just over 24 minutes remaining in regulation.

“She played one of the best games I’ve ever seen,” Menegatti said. “She was really good. I’m proud of her and the whole team.”

Wysong said that she wasn’t worried that the Huskies only had one goal to show for all their effort in the first half.

“We were clearly the better team,” she said. “We were more used to the pressure of being here so many times.”