Patterson Mill found Rising Sun difficult to put away in the second half of their boys’ soccer game, Tuesday afternoon in Bel Air, but the Huskies eventually got the job done and claimed a 4-2 victory.

Patterson Mill jumped out to a 2-0 first half lead, as Joe Cicenia scored off of an assist from Reggie King, in the eighth minute, and Andrew Papageorgeopoulus netted an unassisted goal in 20th minute.

Early in the second half, Rising Sun got on the board with an unassisted tally from Jackson Sopa, but Patterson Mill was able to re-establish its two goal margin when Mike Noya assisted Matt Funk.

The Tigers refused to quit, however, and Sopa once again brought them within one, when he scored his second goal as Drew Winiarczyk assisted. In the 71st minute, Cicenia finally seized command for the Huskies with an unassisted tally, for his second goal of the day.

Edgewood rolls in 3A boys’ opener 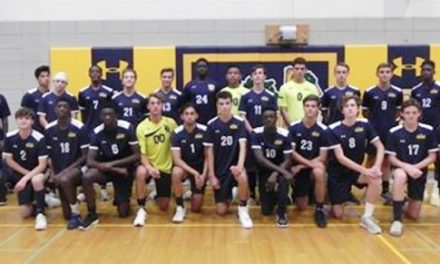 Perry Hall boys explode for five in shutout of Franklin