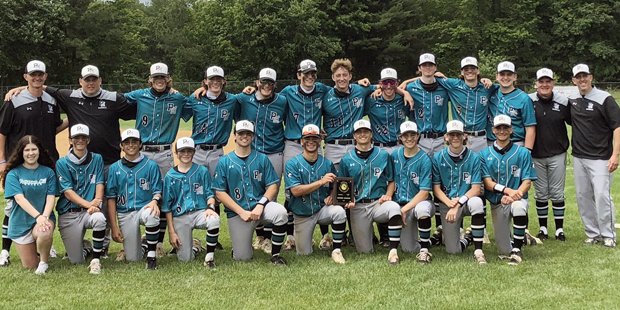 Patterson Mill (14-4), a team which has relied on outstanding pitching and timely hitting all season, followed that formula once again on Saturday, bunching all of their key hits into a five-run second inning and letting it carry them to victory behind the complete game pitching of Ethan Shertzer.

Aiden Laurentius leadoff the Patterson Mill second with a double and moved to third on a single by Caleb Heymann. With runners on the corners and no one down, Huskies coach Matt Roseland put on the squeeze, with was executed perfectly by Shertzer. Laurentius raced home ahead of the throw to the plate to score the first run, with Heymann advancing to second and Shertzer safe at first on the fielder’s choice.

The Huskies continued to play small ball as Jonah Lever advanced both runners with a sacrifice bunt and Mike Hemelt executed the second squeeze bunt of the inning to score Heymann. The Huskies completed the five-run outburst with three consecutive RBI singles by Christian Shertzer, Nathan Vujanic and Evan Celuch.

Colonel Richardson mounted several threats, including a bases load, no out situation in the fifth, but as he did all game, Shertzer escaped with minimal damage. He allowed eight hits and one walk while striking out seven. The only run he allowed was unearned.

Patterson Mill will host a home game in the state quarterfinals, on Monday, against an Catoctin of Frederick County.