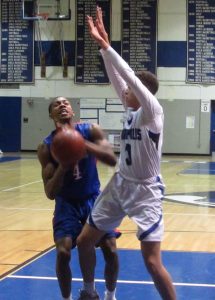 Old Mill’s Hollique Johnson tries to power up to the basket as Annapolis’ Jalen Hawkins defends during Tuesday’s Anne Arundel County boys’ basketball contest. Johnson and the No. 18 Patriots improved to 5-0 in league play with a 65-56 decision over the 16th-ranked Panthers on Riva Road.

Old Mill High got off to a solid start Tuesday and didn’t let up, posting a 65-56 over 16th-ranked Annapolis in an Anne Arundel County boys’ basketball contest in the state capital.

Overcoming an early deficit, the defending league champ Patriots broke down the Panthers’ zone defense to claim sole possession of first. The Millersville school is the only undefeated (5-0) in the Anne Arundel standings.

“We really wanted to beat them because the last two years we have been losing [to Annapolis] and that really motivated us to get this win today,” Hollique Johnson said.

“We had more assists than we rebounds in the first quarter and that’s the type of game I want our guys to play,” Old Mill coach Mike Francis said.

Old Mill never trailed after going on a 11-2 first quarter run that included a trifecta from Avion Robinson (14 points) and Hollique Johnson’s up and over move in the paint. The Patriots fended off several runs by Panthers.

Old Mill’s man-to-man smothered the Panthers (6-2, 5-1 Anne Arundel), who managed to score field goal in the first five minutes. Trailing 19-9, Annapolis went on an 8-2 run to bring the game within four, but Robinson knocked down from three feet in the paint to give the Patriots a 23-17 lead to end the first quarter.

Hollique Johnson netted six points during an 11-3 run to start the second, extending Old Mill’s lead to 34-20. The double-digit lead held until late into second when Mekhi Thompson and Jayson Johnson combined to score five points in the final minute, pulling the Panthers within eight.

“Whenever they would press up we would just throw the ball over them and we got easily layups every time,” Hollique Johnson said.

Annapolis drew within four points twice in the third, but on both times Robinson and Almaralis countered with baskets from close range. Jones’ jumper brought Annapolis to within 45-41, but moments later, was called for a technical foul. Hollique Johnson converted the technical free throws as Old Mill stretched the advantage to seven entering the fourth.

“Coach Francis just told us to pick it up back up again and don’t ease up on them and that’s what we did.” Hollique Johnson said.

A three-pointer from Johnson and a Mazhi Thames’ layup pushed the Patriots’ lead back to double figures. Annapolis got no closer The Panthers couldn’t get any closer, committing several turnovers

“They came out hard and ready play, they got a lot of easy shots and we never recovered,” Annapolis coach Dan Smalley said. “We fell behind early and we didn’t show enough to make it up.”

Old Mill won’t have much time to rest on its laurels with three more games this week including a county final rematch with Meade and two matches at the Basketball Academy at Morgan State University.

“This win doesn’t mean much right now, we got Meade, Woodlawn and Dunbar and all of those teams will be tough,” Francis said.