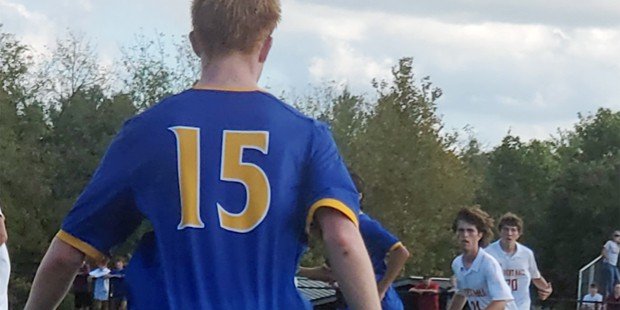 Calvert Hall’s Rocco Pastore netted the only goal in the two games played between Calvert Hall and Loyola this year. That goal lifted the top-ranked Cards to 1-0 win on Monday.

After playing 100 minutes of scoreless soccer the first time they met, a month ago at Paul Angelo Russo Stadium, No. 1 Calvert Hall and No. 3 Loyola Blakefield went toe-to-toe without a score for another 60 minutes, on Monday at Meadowood Regional Park in Brooklandville, before the Cardinals’ Rocco Pastore finally broke the stalemate.

Pastore found the top right corner of the net with 20 minutes to go in regulation, enough to give Calvert Hall a 1-0 victory over the Dons in MIAA A conference action, as the Cardinals rebounded from Friday’s 2-1 overtime loss at No. 2 McDonogh.

“Even though we lost on Friday, we talked about it yesterday, about how you react after that, and we played smart today,” said Calvert Hall coach Rich Zinkand. “We controlled the tempo of the game, and we were good in transition.

“Our guys got back and stayed connected and got behind the ball. They were covering for each other, and it was pressure, cover, and balance that did the job. It all worked well today. It took a special goal from Rocco (Pastore) to get on the board, because their keeper Jordy Eckman was outstanding in the goal.”

“I had taken a shot off a corner kick about 5 minutes before I had a second attempt, and I knew after missing the earlier shot that I had to do better,” said Pastore. “After a great corner by Cody Angelini, the ball hit Josh Nagy in the back, and I followed a half-volley and then put it in the top right corner.”

Despite its gaudy record and lead in the MIAA A Conference, this victory was a shot of confidence for the Cardinals.

“This is a huge win, and we needed this to stay in first place after coming off that loss,” said Pastore. “Today, we got the job done. It was a great team effort. We won a lot of 50-50 balls, and we had to work hard all day against Loyola.”

Eckman made 12 saves for Blakefield and, in addition to the praise he received from Zinkand, the Dons net minder impressed his own coach, Lee Tschantret, who was also impressed by the Cardinals.

“Jordy made a number of great saves today, and 3 or 4 that were right at him were spectacular,” said Tschantret. “We ran into a buzz saw today. Calvert Hall was sharp. They put on a clinic with their touch-passing, and the way they moved the ball. They were a step quicker than us everywhere on the field today.”

Ekman’s counterpart Nate Jones made 5 saves saves en-route to another shutout for the Cards.