There was a time Glenelg High baseball coach Steve Tiffany and his staff thought Nick Duvall might make a nice utility player for the team.

His role turned out to be just a little more prominent than that for the Gladiators.

Saturday afternoon in the Class 2A championship game, Duvall pitched six innings and delivered a game-winning three-run double in sixth inning to lead Glenelg to a 4-1 victory over the previously unbeaten Patuxent from Calvert County. The win marked the sixth state championship for the Howard County program, and first for since 1999.

“Nick Duvall is an absolute stud,” Glenelg coach Steve Tiffany said. “He was a kid we thought was going to be a utility player for us. He hit in the 4 hole and just beat a 24-0 baseball team, and oh by the way had a bases-clearing [double] because they didn’t think he could hit.”

The state-championship conclusion to the season did not seem likely early in the season. Through six games the Gladiators were 3-3 and had lost three in a row, the last of which a 12-0 drubbing by River Hill.

“We had a long pow-wow after the 12-0 loss,” Tiffany said. “We embarrassed ourselves, and man for man, guy for guy we said we were going to put our best foot forward and battle and compete.” 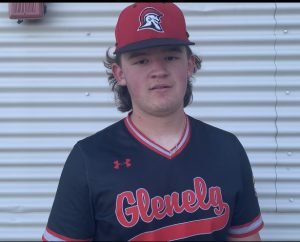 Big Game Nick: Nick Duvall helped Glenelg baseball end its three-decade title drought Saturday. The junior had a bases loaded clearing double in the sixth inning and pitched six solid innings as the No. 9 Gladiators won the Class 2A championship with a 4-1 victory over previously undefeated Patuxent of Calvert County at Regency Furniture Stadium in Waldorf.

Glenelg took a 1-0 lead on Saturday in the top of the fourth when Nick Bilotto reached on an error, advanced to third on a pair of subsequent walks and scored on Alfonse Dello Russo’s squeeze bunt. But Patuxent evened the score in the inning’s bottom half when Nathan Robey’s RBI single plated Will Hagan.

But the Gladiators went in front to stay in the top of the sixth. Taking advantage of some shaky Patuxent defense, Glenelg loaded the bases to bring up Duvall with two outs. Duvall then lashed a double to the corner in left field to drive home all three runners in what was ultimately the decisive blow.

“I was sitting on fastball. I haven’t been able to hit a curveball all year and they gave me one and I just hit it,” Duvall said of the at-bat. “I couldn’t even feel my body. It was insane.”

Duvall followed up by setting the Panthers down in order in the inning’s bottom half, finishing his day on the mound. Jackson Kelley came on to work a scoreless seventh to nail down the Gladiators’ championship.

In his six innings of work, Duvall allowed just two hits and struck out four.

It was a difficult ending in the other dugout, as Patuxent had entered the game unbeaten and in search of its program’s first state title. The Panthers survived several early threats on Saturday, but an uncharacteristically tough day in the field ultimately doomed the Calvert County team in its quest.

“Couple innings away…a hit here, a hit there from doing something we’ve never done,” Patuxent coach Keith Powell said. “We picked a bad day. We had two hits and five errors. You can’t win at any level like that, but definitely not in a state championship game against a great team when you do that.”

After defeating No. 8 North East in eight innings in the semifinals Wednesday at Regency Stadium, Tiffany had said he hadn’t yet reached the championship game in his dreams.

After his team earned the title Saturday, the reality might have even exceeded the dream.

“Words can’t describe how I feel for these guys and our program,” Tiffany said. “I just love my team, my guys.”