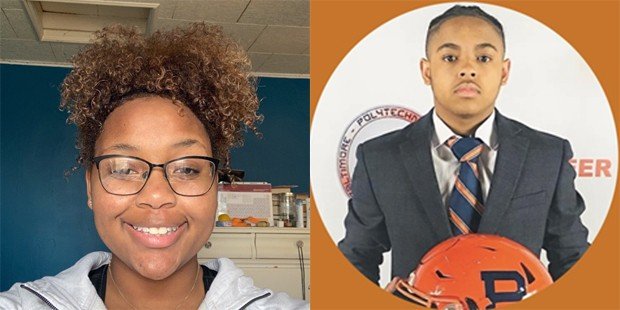 One of the highlights of the high school sports year, the annual McCormick Unsung Heroes Awards, took place Monday night and it turned out to be a huge evening for Paige Holley, a girls lacrosse player from Parkville High, and Gregory Toliver, a football player from Baltimore Polytechnic Institute, as they each took home a grand prize, the $40,000 Charles Perry McCormick College Scholarship Award.

In its 81st year, the McCormick Unsung Heroes Awards took place in a virtual format for the second consecutive year because of the COVID-19 pandemic as a total of 100 Baltimore area athletes, each representing their school as an Unsung Hero, were honored. A total of $105,000 in college scholarships were awarded to six winners and, to date, McCormick has awarded more than $1.9 million in scholarships to deserving student-athletes through its Unsung Heroes program.

Holley, a member of the girls lacrosse team at Parkville, showcases her work ethic and tenacity on the lacrosse field. When the team needed a goalie, even as a field player, she stepped up to learn new skills to benefit the team. During the pandemic, she also volunteered to be a group leader during the team’s virtual practice sessions. Serving as the team’s morale booster, in the words of her coach, “She has the best attitude no matter what her role is that day.”

“I was shocked,” said Holley of hearing her name called as a grand prize winner. “I didn’t think I was going to win. “I am going to Loyola College (in Maryland) and I had some other scholarship money, but this allows me to go almost for free. It’s a blessing.”

Toliver excels on and off the football field at Poly. A de facto tutor for the football team, he led virtual meetings during the pandemic, ensuring that sophomores joining the varsity team learned about the team’s defense. A lifelong athlete, he also gave up his place on the school’s golf team so he could attend Saturday workouts for football. Even as he worked two jobs to help support his family during the pandemic, Toliver said, “I won’t allow my work to become a distraction for my love of playing the game of football.”

“My dad has been deceased since I was six, and it has just been my mom and I,” said Toliver. “I am extremely grateful for this honor and it motivates me to want to work even harder. “I want to thank all of my coaches and teachers for supporting me, but I really want to thank my mom. She got me to this point.”

In addition to Holley and Toliver, four other students were recognized with additional scholarships on Monday.

“Surround yourself, and continue surrounding yourself, with good people,” said Reed, who recalled the teachers, coaches and others who supported and mentored him along the way. “You have to have a great team around you because that’s what you’re going to need going forward. Think about how they influence and motivate you.”

Unable to gather in person for the traditional awards dinner, McCormick made sure the honorees could share a meal together, sending each family a pizza kit to enjoy during the virtual ceremony. In addition, for the second consecutive year, DJ Kopec entertained the Unsung Heroes by spinning toons at the beginning and end of the show.