Junior was perfect for MIAA A champ Spalding, wins VSN’s Pitcher of the Year honor 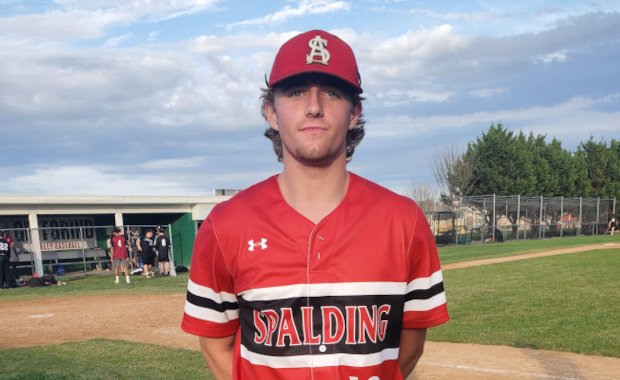 2022 VSN BASEBALL PITCHER OF THE YEAR

After showing lots of promise as a sophomore in 2021, Parker Thomas more than lived up to the expectations this spring. Thomas fulfilled the mission he put himself on and led the Archbishop Spalding Cavaliers to an undefeated regular season and tournament championship in the MIAA A Conference and the wire-to-wire No. 1 ranking in the VSN Top 20.

The remarkable campaign erased the painful memory of the 2021 season in which the Cavaliers won the A Conference regular season title and top seed in the post season double elimination tournament only to lose two straight in the finals to eventual champion Gilman School, a club they had defeated twice in regular season.

Emerging as the area’s top pitcher with his 8-0 record featuring a microscopic 0.36 earned run average and playing third base when not on the bump and batting cleanup with two dingers, 15 RBIs, scored 18 times and had three doubles. He had gone 6-2 pitching the year before but closed this recently completed season with a huge finish. Thomas notched his 8th victory by punching out 11 batters in 5.2 innings pitched to eliminate Calvert Hall College, 7-2 in the semifinals securing a berth in the finals.

Thomas also walloped a three-run dong in what was arguably the biggest win and performance of his young career and this time the Cavs posted their third win of the tournament in the next game and knocked out the “if necessary game” to claim the school’s fourth A Conference championship in nine seasons under coach Jeff Palumbo.

“We had a lot of seniors who knew it was our time and we just kept grinding toward it,” said Thomas, who has already committed East Carolina University which reached the NCAA Division I Super Regionals two weeks ago. ”We had more confidence this season and played one game at a time and our younger players stepped up.

“We had a sour taste in our mouths from losing twice to Gilman in the playoffs last year. We really wanted it this season. I know how bad I wanted it.”

Coach Palumbo said that the 6-foot-3, 195-pound Thomas was “truly dominant on the mound after being very successful (6-2) his sophomore year and he was determined to build off that and he sure did. He was also our No. 4-hole hitter and great leader by example.

”Believe me it’s not easy to be a two-way player especially when you are playing 3 or 4 times week during the season. He was a key part of a special pitching staff that had so many aces.”

Opposing batters hit only .161 against Thomas whose WHIP was 0.98 and he struck out 60 foes in 38.2 innings and he did not give up an earned in regular season play which prompted Palumbo to say “that is one of the most impressive individual stats” in his coaching career. Thomas yielded only six runs overall.

His repertoire includes 2 and 4-seam fastballs, a changeup and slider. He is content with those pitches and they obviously work together well for him.

”I don’t expect to add anymore pitches because what I’ve been using works for me,“ said Thomas, who’s called P.J. by some family members.

Thomas said he always listens to the music of “Imgaine Dragons’’ before every game, zones in and prays for his teammates to help him wherever they can.

“We try to have a lot of fun when we are playing,” said Thomas. “And that doesn’t mean we don’t give 100 percent everyday. We love the game and we love each other and I think that really showed this season.”

Thomas resides with his parents in Bowie. They met while attending Bowie High and went on to attend the University of Maryland together.

Parker’s older brother, Chris played 3-sports at Spalding in soccer, basketball and baseball. Now in his 30’s, Chris is playing pro soccer over in England.

Younger brother, Dylan also plays soccer and is expected to play at Spalding as well.

Parker is hoping he will get a little bigger and stronger for his senior year at Spalding that he hopes will be a “repeat” season. He carries a 3.3 GPA and has not made up his mind on a major at East Carolina.

“East Carolina is a perfect fit for me academically and athletically,” he said.

Palumbo expects his ace to “get some attention from the pro scouts in 2023.”