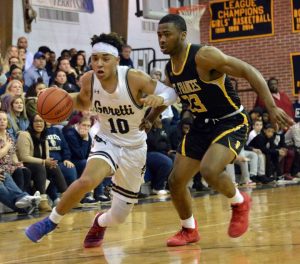 Goretti’s Rashaan Edwards drives past St. Frances’ Jordan Toles during Wednesday’s Baltimore Catholic League basketball match. The No. 2 Panthers rallied in the second half for a 62-58 victory over Goretti in a battle of first-place in Hagerstown.

Trailing at halftime at St. Maria Goretti Wednesday evening, St. Frances knew things had to change or it would be an extra-long ride back from Hagerstown.

The No. 2 Panthers regrouped in the second half to claim a 62-58 victory in Baltimore Catholic League action. Junior guard Adrian Baldwin finished with 22 points, 5 rebounds and 5 assists , Jordan Toles added 18 and 7 rebounds for St. Frances (22-3 overall, 9-1 BCL).

The East Baltimore squad outscored the Gaels, 40-28, over the final 16 minutes to maintain a share of first-place in the BCL. The Panthers are tied with Mount St. Joseph (8-1) with one loss, but St. Joe currently owns the head-to-head tiebreaker based on its win at St. Frances last month.

Trailing 30-22 at halftime, St. Frances went on a 16-5 run to start the second half. The Panthers, who led 38-35 after the run, held Gorettil scoreless for four minutes.

Goretti (17-4, 8-2 BCL)  closed the third with five straight points to take a 40-38 advantage in the fourth. The Panthers answered with an 8-2 run before Prezmek Golek converted a rare five-point play, giving Goretti the lead back.

Golek finished with 21 points for Goretti, who lost at St. Frances last month, and Baltimore resident RJ Blakeney had 19 points.