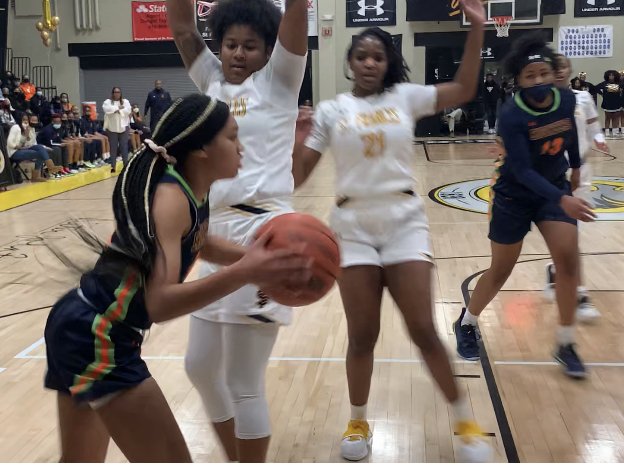 Poly’s Taylor Addison looks to pass the basketball as St. Frances’ Dakieran Turner defends during Saturday’s final match of the Public vs. Private Challenge. After establishing a big early lead, the second-ranked Panthers pulled away for a 60-47 victory over No. 4 Poly at Phelps Gym in East Baltimore.

After being shuttered in 2020 because of the COVID-19 pandemic and postponed last month due to a surge in COVID infections, the Public vs. Private girls basketball mixer returned, albeit in a condensed version at St. Frances Academy.

Buoyed by No. 2 St. Frances’ victory over fourth-ranked Poly in the finale, private schools won four of the seven matches. In another Top 10 match, fifth-ranked Howard defeated No. 8 Mercy in a battle of unbeatens.

Fourth-ranked Western, Concordia Prep and South River were among the victorious locals inside Phelps Gym. Meade absorbed a 70-42 to Southern Maryland’s St. Mary’s Ryken.
Mehkia Chase poured 18 of her game-high 25 points for St. Mary’s Ryken, which led 17-4 after one and 36-17 at halftime. Sydney Johnson added 11 points for the Leonardtown school. 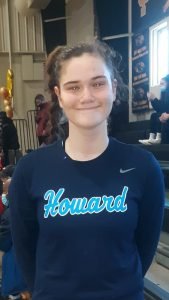 Meghan Yarnevich helped Howard keep its perfect season intact with 17 points and six rebounds in the fifth-ranked Lions’ victory over previously undefeated and No. 8 Mercy.

After losses to Crofton and No. 7 Old Mill in Anne Arundel County play on consecutive nights, the third game in as many days was the charm for South River. The Seahawks rode a hot start from Ryleigh Adams in a 56-35 rout of Friends School.

Adams, a freshman forward, scored 16 of her 18 points in the first half as the Edgewater school ended Friends School’s perfect run. Senior Maya Carnes finished with a  game-high 20 points for the Quakers (13-1), the top squad in the IAAM C Conference.

Concordia Prep, enjoying a solid season in the IAAM C1, won its fourth straight with a 48-37 decision over Chesapeake-Baltimore County. Junior Gabby Smelcer had a game-high 16 points for the Saints (14-6), and Hailee Ford added 13.

Kasey Slade finished with eight points for Chesapeake (1-9), which led 24-22 at halftime. Concordia outscored the Bayhawks, 26-15, over the final two quarters.

A week after losing on St. Frances’ hardwood, Western had a different outcome in its return Saturday as the Doves handled Prince George’s County’s National Christian Academy, 72-38.

Pryor, who will play for Sacred Heart next season, scored 16 in the first half. Tamir Washington led National Christian with nine points.

A showdown of undefeated teams was an one-sided affair as Howard continued its impressive two season stretch with a 57-29 rout of Mercy. Meghan Yarnevich led all scorers with 17 and collected six boards for the Lions, and Gabby Kennerly netted 15.

The reigning Howard County champions bested the Magic in nearly every aspect, winning its 36th consecutive decision dating back to 2020. Two seasons ago, the Lions went 25-0 and qualified for the Class 4A state semifinals, but the remainder of the state tournament was canceled due to the COVID-19 pandemic.

Howard (11-0), now in Class 3A, is again a state final four contender. The Lions may be the area’s best public team after Saturday’s impressive showing in East Baltimore.

“I thought we shared the ball, I thought Meghan really got us out of the gate early,” Howard Coach Scott Robinson said. “I think the key to maintaining our lead was our defense.”

“We understood that there were a couple of good shooters for them. [we knew we had to be] relentless and keep at it,” Yarnevich said. “We’re super happy about this win. It’s really big for us.”

The Ellicott City school raced out to a 19-7 first quarter as Yarnevich and Scott, both about 6-foot-1, controlled the glass and protected the rim. Samiyah Nasir and Mannat Gill provided a major boost for Howard with their tenacity on the defensive end.

Freshman guard Milan Brown had 11 points and seven rebounds for Mercy (16-1), enjoying its finest season in several decades. The Baltimore City private school is the top team in the IAAM B1 Conference. 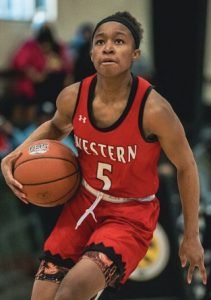 Ny’Ceara Pryor had another big game for Western as the senior guard finished with 26 points in the No. 4 Doves’ victory over National Christian Academy.

Magic coach Mary Ella Marion said the loss was a “wake-up call” for her club.

“That was a really good team. It seems like they wanted it a little bit more than what we did out there on the floor,” Marion said. “We knew that they were big, we knew that they could shoot the ball from outside, we knew they were aggressive. And we had to be on our A-game today and we were not.”

In a matchup originally made for January’s Basketball Academy at Morgan State (event canceled in December due to COVID), reigning City champ Poly and IAAM A champ St. Frances wrapped up Saturday’s festivities. The Panthers jumped out to a big advantage, then managed an Engineer charge to gain a 60-47 decision.

The Panthers never trailed, winning their second game in as many days. Friday, St. Frances routed No. 9 Our Lady of Mount Carmel in its Homecoming.

“We had a lot of high expectations coming into the game,” said Bannerman. “We told each other we needed to come out with intensity…don’t let up and run them out the gym.”

The Panthers led 14-1 after the opening quarter and 27-10 at halftime. Poly, which didn’t score its first basket until the opening seconds of the second quarter, rallied in the second half.

The Panthers stretched the advantage to 48-30 as Cherisier started the fourth with a pair of scores. Poly got no closer than 13 in the final minutes.

St. Frances coach Jerome Shelton was glad to play their Baltimore City public counterpart to prepare them for the stretch run in IAAM A play.

“We knew Poly was going to play us tough,” said Shelton. “I think this helped us moving forward.”