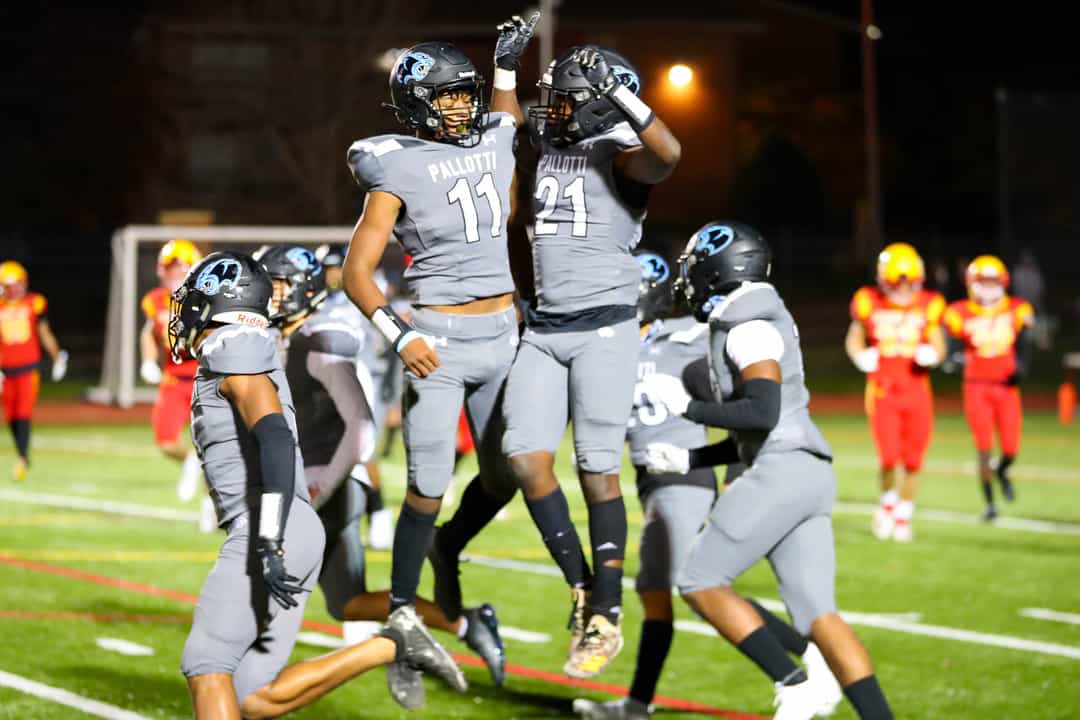 While St. Vincent Pallotti High football’s special teams struggled in the early going against Calvert Hall College on Friday night, they came back with a vengeance during a game-changing rally in the third quarter as the Panthers topped the Cardinals, 32-15, at Paul Angelo Russo Stadium in Towson.

After a bad snap on a punt attempt gave Calvert Hall possession at the Pallotti 21-yard line, the Cardinals converted on a third-and-14 pass from sophomore quarterback Noah Brannock to junior tight end Daniel Owens to keep the drive alive before eventually scoring on sophomore Daniel Harper’s 9-yard run to jump on top, 7-0, early in the second quarter.

The Panthers pulled to within a point on their ensuing drive when junior quarterback Kenneth Prince wiggled his way through several tacklers on a spectacular 23-yard run.

Their special teams really lived up to their name in the third quarter when junior Marquise Allsup gathered in a punt at his own 40-yard line, faked right and cut back to his left before streaking down the sideline for a touchdown and a 12-7 advantage with just under 11 minutes left in the period.

“Marquise is just a phenomenal athlete,” Pallotti coach Tony Ashley said about the junior captain. “He’a a great teammate and has great character on and off the field.”

Allsup said that the play brought some much-needed energy to the Panthers.

Pallotti senior Connor Maloney chipped in when he faked a punt and rumbled 14 yards to sustain another drive that was capped by Prince’s perfect 24-yard pass to senior wideout William Webster-Brown to up the visitors’ advantage to 19-7 with just over two minutes left in the quarter.

Maloney said that the fake-and-run was not a designed play, but when the snap from center “kind of hung in the air,” he saw an opening and took off.

“I was confident I could make it,” he said about the play which ended when he was pushed out of bounds just beyond the first-down marker.

“We made some mistakes on special teams — and they came back to haunt us,” he said. “We’d like to have a couple of those back.”

The lead ballooned to 25-7 after a long interception return by junior safety Kameron Howard gave the Panthers the ball at the 2-yard line and junior running back Clayton Bulluck-Thomas plowed his way for a touchdown with five minutes remaining in regulation.

Calvert Hall made it a little closer when Brannock — making his first start — found senior wideout Tre Jordan, who made a tremendous grab in the back of the end zone on a 21-yard toss a couple of minutes later.

However, a 61-yard pick-six by Pallotti sophomore cornerback Dante Lovett with just over a minute to go in the contest wrapped up the Panthers’ 12th straight victory dating back to last season and dropped the Cardinals to 0-2 for the first time since 2015.

Ward said that Brannock got the nod because of an injury to senior signal-caller Amir Jenkins, who usually starts.

Marquise Allsup (left) and Connor Maloney played major roles for Pallotti Friday evening. Maloney, who handled kicking and punting duties as well as played defense, had a key fake punt run for a first run, while Allsup’s 60-yard punt return score gave the Panthers the lead for good. The Laurel school outscored the Cardinals, 26-8, in the second half to win its 12th consecutive decision, dating back to last season.

Ward, a Hall alum in his first year as coach, said his team, which featured only three starters from last year’s squad, has a bright future.

“I’m looking forward to growing with these guys,” he said.

Pallotti will see how its young contingent will fare when it meets Mount St. Joseph, which won the MIAA A Conference last season. It will be the first game for the Gaels, who had matches last weekend and this weekend scrapped because of a Covid-19 breakout.

Meanwhile, Calvert Hall will try to figure out its next opponent in this pandemic-shortened season.

“We were supposed to play Spalding, but we played them last week,” Ward said. “This is the toughest year to be a coach or a player, because things change so quickly.”