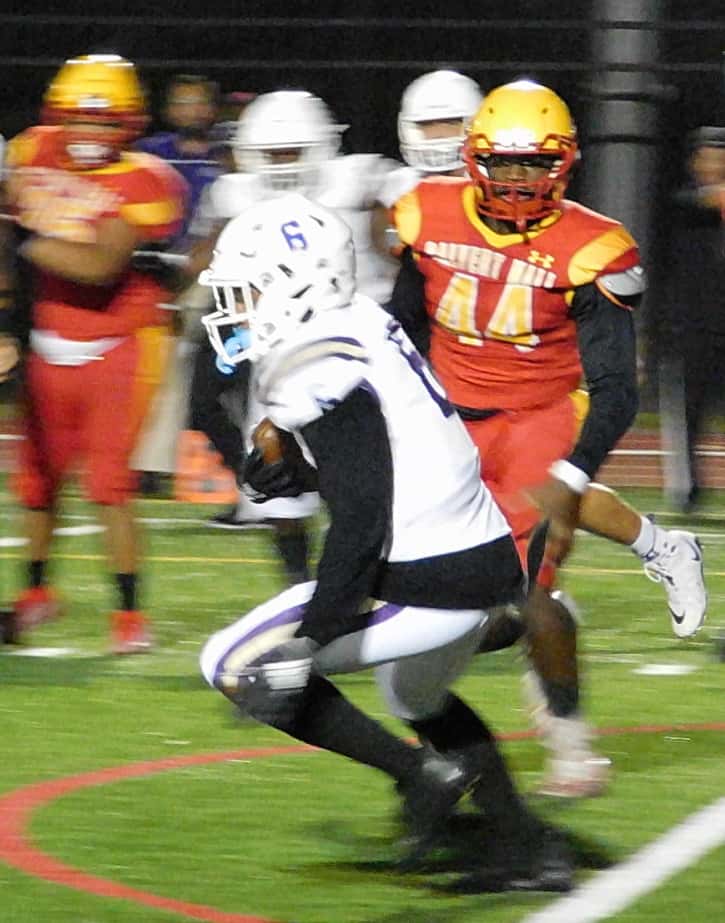 Mount St. Joseph’s Semaj Henson (6) looks for yardage as Calvert Hall’s Chidi Ejoh pursues during Friday’s MIAA A Conference football opener. The second-ranked Gaels knocked off the previously undefeated and No. 3 Cardinals, 20-10, in front of more than 5,000 at Russo Stadium in Towson.

Just like last year, Mount St. Joseph’s football team was up to the task of making a very good Calvert Hall College squad look almost pedestrian in the No. 2 Gaels’ 20-10 victory on Friday night in front of a packed audience of more than 5,000 at Paul Angelo Russo Stadium in Towson.

And the same trio of players — junior quarterback Billy Atkins, junior wideout Donte Thornton and senior running back Marlowe Wax — posed most of the problems on offense for the third-ranked Cardinals, in the MIAA A Conference season-opener for both teams.

Meanwhile, a Mount St. Joseph (4-1 overall, 1-0 MIAA A) defense spearheaded by senior linemen Blake Wisnauskas and Tyler Leavy and sophomore Stephen Schulze stationed in front of linebackers Wax, juniors LJ Johnson and Brandon Fique and senior Nathan Slutzky kept the Cardinals and senior running back Sean Tucker in check most of the night.

“We knew we had to contain him,” Mount St. Joseph coach Rich Holzer said about Tucker, a Syracuse University signee, after his team improved to 4-1. “You’re not going to stop a great back like him, but we wanted to limit his explosive runs.”

Even so, Tucker and the Cardinals (4-1, 0-1 MIAA A) were moving the ball effectively on their first two drives and only had a 24-yard field goal by senior kicker Kieran O’Neill to show for their efforts.

On the first drive, Calvert Hall had a first down at the Gaels’ 14-yard line before settling for O’Neill’s three-pointer and then began their next possession at the visitors’ 29-yard line.

Three carries by Tucker later, the Cardinals arrived at the St. Joe 10 before Tucker was stuffed for no gain on a fourth-down attempt.

“They were moving the ball really well and they had us on our heels a little bit,” Holzer said. “Nobody had run the ball on us like they did. But our defensive line has been unbelievable all year, and we stopped them.”

The Gaels then put together a 13-yard drive of their own, capped on a 14-yard toss from Atkins to junior receiver Ausar Crawley to take a 7-3 lead with 26 seconds remaining in the opening quarter.

Calvert Hall answered in kind on a 12-yard sequence that Tucker finished on a 6-yard run, up the gut, to give the Cards their first and only advantage, 10-7.

Near the end of the first half, St. Joe rallied when Atkins launched a 49-yard beauty that Thornton caught in stride at the Calvert Hall 6-yard line.

Three plays later, the same pair connected on a 5-yard slant for a 13-10 Gaels’ lead.

Their final scoring thrust came on a 94-yard series that Atkins concluded with an 11-yard strike to Thornton with just over three minutes remaining in the third quarter.

The defense took over from there, limiting Tucker on the ground and frustrating junior quarterback Amir Jenkins and his freshman backup, Noah Brannock, who came in for the first two series of the final period before Jenkins was back under center for the final rally bids by the Cardinals.

The Gaels did a good job of keeping both QB’s and standout senior receiver Cole Herbert from inflicting much damage.

“I’ve been doing that for years,” he said. “It’s just become second nature to me.”

Atkins added that he’s perfectly comfortable taking what the Cardinal defense gave him and Thornton.

“When I get a chance, I’ll take a shot (at going deep to Thornton),” he said. “But when they stacked the box, I knew I had to throw.”

Thornton said his bag of tricks was working well against the Calvert Hall DB’s.

Calvert Hall coach Donald Davis lamented the fact that his team did not take full advantage of its early opportunities.

“We just didn’t have enough explosive plays, and that’s been our hallmark,” he said. “We didn’t do a good job of getting Cole in space — or (senior slot receiver Kainoa) Sasaki either. I have to do a better job of getting my guys going early.”

Calvert Hall will attempt to get back on track at No. 5 McDonogh next Friday while the Gaels will face Gilman on Oct. 4. 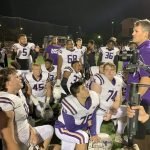 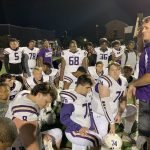 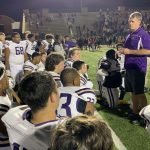 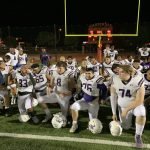 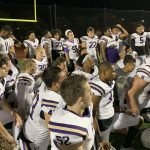 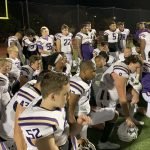 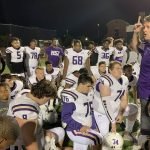 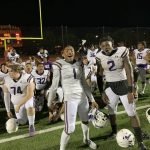 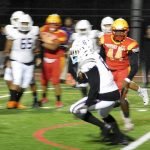 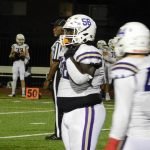 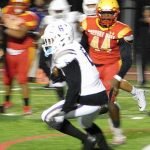 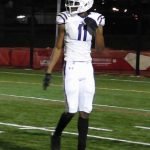 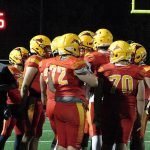 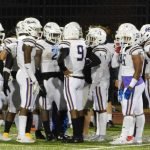