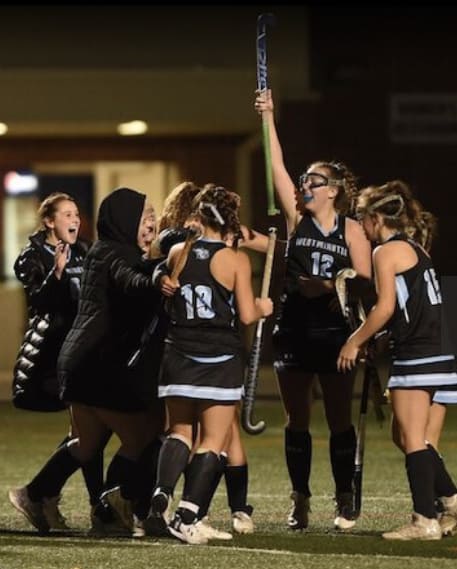 Westminster celebrates after scoring in overtime to win Wednesday’s Class 3A state field hockey semifinal over previously undefeated Huntingtown. The Owls will play Urbana for the state title Saturday afternoon at Washington College.

Westminster High is headed to the Class 3A state field hockey championship and the Owls have Jess Kent to thank.

The freshman scored with 7 minutes, 35 seconds left in overtime, giving Westminster a 2-1 victory over Southern Maryland’s Huntingtown, in a state semifinal at Paint Branch in Montgomery County Wednesday evening.

The Carroll County squad will play Frederick County’s Urbana for the state title, Saturday at 1:30 p.m. at Washington College’s Kirby Field. Urbana’s ended River Hill’s bid with a 3-1 victory in the other state semifinal.

Beach scored the game’s first goal in the 24th minute. Less than two minutes into the second half, Caretti tipped in Maggie Goodwin’s pass.

Vasilios answered for the Howard County squad, but Maddie Hillman’s insurance goal with 10 minutes left in regulation put the game out of the reach. It was the second state final four for River Hill (10-5-1), which won the top prize (3A) in its first trip in 2010.

Westminster (10-4) is on the verge of a 10th title after besting previously undefeated Huntingtown. Senior Audrey Detrow scored for the Owls in regulation.

The Hurricanes (13-1) pulled even on Alexa Zeruto’s goal in the second half. Finally, in overtime, Kent took a cross from Emma Border and pushed the ball into the net, sending the Carroll County school to its 16th state final. The Owls last won in 2014 (3A).