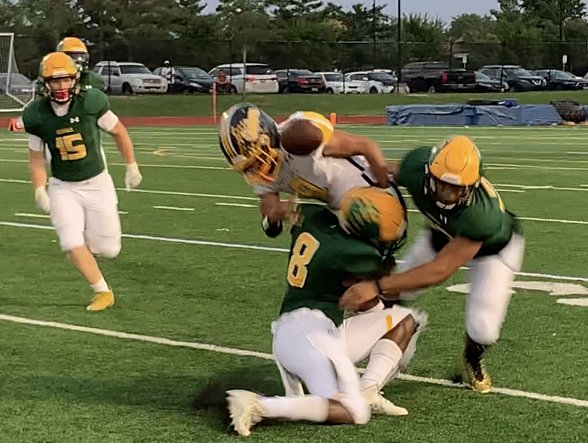 Dundalk High senior Marcus Nicholson bowed his head after his punt gave Perry Hall an opportunity to tie or take the  lead late in regulation of Friday’s Baltimore County Division I football game. It was one of many negative plays the 13th-ranked Owls made.

But Dundalk produced enough positive plays as Nicholson atoned with an interception with 52 seconds remaining in regulation, preserving a 14-7 victory. Nicholson had a receiving score and junior running back Jordan Fiorenza added a 37-yard touchdown run.

The Owls, who posted decisive road wins at Century and Parkville, know they were fortunate Friday in their home and league opener.

“I told the kids good, bad or ugly, a win’s a win…it doesn’t matter how it comes,” said Dundalk coach Matt Banta. “We found a way, we were resilient and I’m proud of the guys for digging deep and closing it out.”

“It wasn’t one of the prettiest wins in Dundalk history, but we came together as a team,” said Nicholson.

Disjointed offensively behind penalties and poor snaps, Dundalk assembled a productive drive as Fiorenza broke through a hole and scampered to the end zone on the final play of the third quarter for the game’s first score. The Owls’ defense, brilliant nearly the entire evening, forced Perry Hall to punt.

Dundalk, starting Perry Hall’s 48-yard line, took advantage of Gators’ unsportsmanlike penalty to advance to the 19. The Owls stunted the progress with a holding penalty, leaving them with 4th-and-16 at Perry Hall’s 25.

With quarterback Calvin Stokes sidelined briefly, senior Antonio Brown ran to his right. Before crossing the line of scrimmage, he threw the ball to a wide open Nicholson in the end zone for a touchdown, giving Dundalk a 14-0 advantage with 3:02 left in regulation.

Perry Hall immediately answered as Jaylan Johnson took a handoff from quarterback Isaiah Armstrong. With the Owls defense collapsing on him, Johnson lofted a pass to Jared Moore,  who sprinted to the end zone for a touchdown, bringing the Gators to 14-7.

The Ebenezer Road school got the ball back at Dundalk’s 45 with 2:47 to play as Nicholson’s punt traveled just three yards. Perry Hall reached the 19 before consecutive penalties knocked it past the Owls’ 40.

Nicholson easily captured Armstrong’s 3rd-and-29 heave at around the 10, securing the victory.

“The kid (Nicholson) doesn’t come off the field for us. We ask so much of him,” said Banta. “He’s a gamer and a great leader. We lean on those guys when the game’s on the line.”

“My legs were kind of dead and it (ball) got the side of my foot,” said Nicholson of the punt. “It was my fault they had the ball right there and knew I had to make a play.”

Nicholson’s clinching INT was complemented with two sacks from senior Dalan Johnson, an interception by Stokes and fumble recoveries  by Dale Martin and Kamare Watson. Watson’s recovery inside Perry Hall’s 5 opened play in the second half, but an unsportsmanlike and personal foul penalty, pushed the ball back to the 34.

The Owls turned the ball over on downs.

It was that kind of night.

“I give credit to a lot of those guys in the locker room,” said Nicholson. “They fought through injuries, fought through little mishaps and held them off as long as we could.”

Jordan Fiorenza (left) had a rushing touchdown, Dalan Johnson recorded two sacks and Marcus Nicholson caught a fourth quarter touchdown pass and intercepted a pass with 52 seconds left in regulation for Dundalk Friday evening. The Owls are 3-0 for the first time since 2018.

But penalties and turnovers doomed the Gators’ bid for their first 3-0 start since 2016.

“One thing we talked about all week was good teams don’t hurt themselves, and there were mistakes all over the field tonight,” said Perry Hall coach Luke Ethington. “We got to go back and shore some things up. I like the character of this team…they kept fighting.”