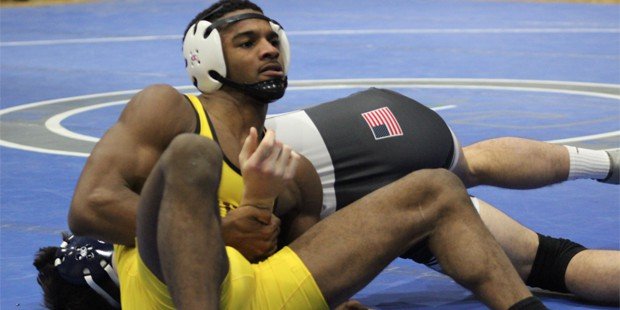 The Sparrows Point wrestling team (No. 12 in the latest Maryland state rankings) had not tasted defeat at the hands of a fellow Baltimore County team in 85 matches over the last six years. No. 16 Owings Mills came into the Point’s gym for Thursday night’s Baltimore County dual meet championship match facing that daunting statistic.

The Eagles would not be intimated though and headed home with the title in hand for first-year head coach Ryan Mackin, after a 37-28 win over the Pointers. Owings Mills came in battle tested after trips to the Bethlehem Christmas Classic in Pennsylvania, and showdowns with No. 4 Spalding and Delaware’s Indian River (No. 3 in Division II rankings).

“I’m happy with it (the county dual team title),” said Mackin.” I think the guys did great. If I’m being honest, it’s just hard work. That’s what it is. It’s a group of hard-working dedicated kids. We talked at Spalding, the thing was to have them battle tested all year long. We’re not shying away. We want to wrestle the toughest people we possibly can. That’s why we traveled out of state, to wrestle some of the best kids in the country. That’s why we do that, because tonight was a dog fight and we brought experienced dogs to the dog fight.

“Wow, team effort has never been more obvious than right there. Every single person played a role. I can go through the entire lineup and talk about how well they did. We left a couple of points on the board. It’s probably my fault. I think I was getting too worked up earlier. I didn’t think I did a great job, but the wrestlers did amazing.”

Owings Mills knew a quick start would be key in one of the toughest wrestling environments for visitors in the state. The Point faithful come out in bunches and are very passionate about their team. That spirit was on display again on this night.

No.10 Damen Tiller (106) and No. 3 Alex Dufour (113) did their best to snuff the home crowd’s enthusiasm with a decision and major-decision, respectively.

The score was knotted at seven when the Eagles went on a three-match win streak. At 132, Chris Barnes, a county and region runner-up last year at Pikesville, made his season debut after tearing a ligament in his elbow. The Point ran out Richard Davis (No. 20 at 126) for what promised to be quite a match.

The action was fierce, both guys went hard for six minutes. Barnes looked sharp on his feet. So much so in fact, it was hard to believe he hadn’t wrestled in six months. The high scoring affair saw Barnes walk away as the victor, 15-9.

“I just came out here well prepared,” Barnes added. “I knew I had to do it for the team because the title was on the line. I felt like I could come out here and do what I had to do. I got in my zone before the match. My confidence is just up. I think I was well prepared because of my practice partners, and my coaches, and everything played out right.”

And things played out right again for Owings Mills and Dre’yon Eure at 138lbs. Eure lost two close matches last year, 13-12 and 10-7, to Danny Davis, but turned the tables on this occasion and tallied a big win, 18-14, in another wild, back and forth battle.

Mathematically, the Point needed three pins and any kind of win to keep the streak alive. Sophomore Jake Rallo stepped up big-time to make that happen at 182.

Rallo came in listed in the “Others to watch” section of the 170lb rankings and bumped up to face the No. 11 guy at 182, Diondre Space. This too, was another exciting brawl that saw Rallo pick up the improbable win to set the table for the rest of the Point lineup…three pins and you win. 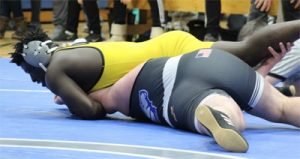 With the score sitting at 31-28 in favor of Owings Mills, the stage was set for a classic heavyweight showdown for the title. The Eagles’ Daniel Olorundare came through for his team registering a third period pin, 4:26.

“I was nervous,” said Olorundare. “But all I kept thinking about was just get the win for my team. I’m at a loss of words right now. I really can’t explain my thoughts. It (getting the pin for the win) was the greatest moment of my season. I feel like crying right now. It’s really something.”

Mackin was glowing after the win. Offering praise to a few of his wrestlers.

“To walk into their house and to take care of business, that’s something all of them can be proud of. Daniel O (Olorundare) came up big for us. I could go on all day about him. He moved here from Nigeria and didn’t know what wrestling was two years ago. He was a first-year wrestler last year. He said at one point, “I worked every day in the offseason because I didn’t want to hold the team back like I did my first year of wrestling.”

“How impressive was Barnes?” Mackin offered. “Richard Davis is a stud, and he comes off an injury that shelved him for almost six months and made it look like he hadn’t missed a day. He had him majored at one point, but Davis wasn’t caving in. I love that. Both guys still slugging it out for six minutes.”

Phil Smith was standing by the rear wall sporting that same kind of smile.

“First it was kinda iffy, the lower weights struggled. But then we started racking up the points with pins. I felt really good, but when we came to 82 (182lb weight class) and we needed one more win to seal the deal, Space lost and I didn’t know how to feel about that. My man Machiavelli got that big six. Then Daniel came in with that clutch pin to win the match.”

Sparrows Point head coach Mike Whisner was understandably down after the match. But at the same time, realized there was a lot for his team to be proud of.

“I was extremely proud of our team tonight. They didn’t give up. We were down by 18 and we bounced all the way back. It came down to the heavyweight match. Two new kids going out there and battling it out. You can’t ask for anything more. This environment was second to none. My hats off to Owings Mills. They’re talented.”

Whisner reflected on the streak ending and what a streak like this means to the program.

“I was sad for the seniors. The night was about them and now they will look back on it and think that the streak ended on their night. (I) wish it had happened on a different night and to be honest, a different gym.

“It was always about competing with the big boys,” Whisner continued. “When I took over in 2005, we would get pounded by the top schools like Owings Mills, Hereford, Catonsville and Eastern Tech for years. I just wanted to compete with those guys and make them worry about us a little. Even though we have been getting the best of those school lately (except last night) we still have the mindset that we are the underdogs. I still will never call us the favorites when we wrestle Hereford or Owings Mills. Too much history from those great programs. If the streak helps put us in that conversation a little, then that is a good thing.”

A new tradition appears to have been born for Mackin.

Next up for both teams are the dual meet regionals. Sparrows Point is set to host the 1A North field which includes No.18 Dunbar. Owings Mills is the frontrunner to host the 2A North duals, but Friday’s early dismissal throws some uncertainty into that region. Matches must be contested by Saturday (the 2nd) to be included in the region standings.