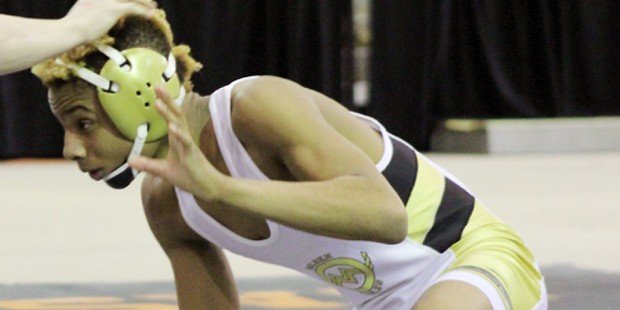 Eagles close with 4 wins to takeout the Vikings, 45-24

The decision to schedule Mount Hebron for a dual meet was an easy one for Owings Mills given their coaches’ ties to the school. Assistant coach Shawn Girch won a state title for the Vikings in 2002, and they also won the 4A/3A dual meet crown that year as well.

Eagles’ head coach Ryan Mackin’s drilling partner as a high-schooler at Hammond was Joe Killo. Killo, who is now one of Mt. Hebron’s assistant coaches, beat Girch three times during their rivalry on the mats, one of those wins kept Girch out of the state tournament.

Both squads won regions crowns to advance to the state dual tournament. Owings Mills fell to Damascus, 50-18, in the 2A semi-final. Mt. Hebron won their 3A semi-final over Bel Air, 42-30, to reach the finals where they came up short against Huntingtown, 46-18.

Needless to say, both teams have high expectations for the season. So, it was a bit disappointing when weigh-ins rolled around Thursday afternoon at Owings Mills and starters were missing from both sides.

“I think I scheduled a dual with a team I knew would show up and they were missing a few weights and it was frustrating,” Mackin said. “In Baltimore County there are so many incomplete teams so I try to schedule matches with full line ups and was frustrated when so many of their starters didn’t show. The ones that did show really brought it though, I was super impressed.”

The teams split the first four matches, with Mt. Hebrom taking a 9-7 lead. The highlight match of that stretch was Eagles’ state champ Alex Dufour picking up a major-decision over Jack McGuire at 120lbs.

“Jack McGuire is an all-out stud in the making,” Mackin added. “He stood out tonight. I have a feeling he’s going to surprise a lot of people, but not me. He’s something special and I can’t wait to tell people “I called that one.”

The Vikings won a decision at 160 and received a forfeit at 170 to knot the match up at 24 all with four bouts remaining. Knowing they were missing some wrestlers and therefore, forfeiting two of those matches, Mt. Hebron needed two pins from their wrestlers to tie-it up at the end.

That hope was extinguished by Owings Mills’ Aziz Onigbanjo when he won a tight battle, 11-10, at 182lbs to close the door on the Vikings.

The Eagles collected forfeits at 195 and 220, then heavyweight Daniel Olorundare polished off the win with a fall.

“For a young group of guys they (mt. Hebron) came in to push the pace,” said Mackin. “The ones that showed were the same ones I saw wrestling all summer with Coach Killo. Killo has really made a huge impact on those guys, they literally traveled everywhere together and it shows.”